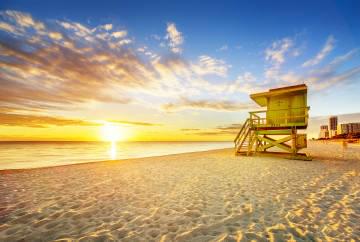 What Florida Has to Offer Cruise Guests

Soak up the Florida sun and get to explore endless beaches, vibrant culture and foodie paradise.

A great many Caribbean cruises feature stops in Floridian ports as part of their itineraries – sometimes Miami, sometimes Fort Lauderdale, sometimes both. If the latter is the case, you’re in for a real treat. Miami and Fort Lauderdale are two of the most interesting cities in the entire state and are only 23 miles apart from one another – both lie right on the Atlantic coast.

Florida has long been a popular destination for not only American holidaymakers, but tourists from all over the globe. Its renowned tropical climate and rich culture makes it one of the most interesting states in the whole of the US. 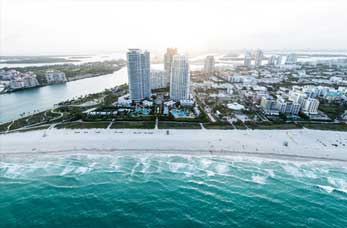 One of the world’s most exciting and glamorous port cities, Miami is a truly one-off wonderland which is synonymous with world-class entertainment, nightlife, culture and cuisine.

However, Miami has a much richer and deeper a history than you might expect. It has been inhabited for thousands of years in one respect or another: in early 2014, evidence of an ancient settlement dating back to 600 BC was discovered at a site which now houses modern developments such as condominiums and office blocks. The Tequesta tribe of Native Americans – who hail from southeast Florida – are known to have inhabited the area for well over a millenium and a half too. They lived there for more than a thousand years before the arrival of the Spanish in 1566, the year after which the Spanish built a mission station.

Florida was controlled thereafter by both the Spanish and the British alternatively, before it was finally ceded to the United States in the early 1800s. Miami became a setting for fighting during the Second Seminole War, which ran from 1835 until 1842 and was fought between the United States and the Seminole, as you may have been able to tell from the name. Just after the start of the war, the US built the Fort Dallas military base in order to further strengthen their position in the Miami area, which was at the time was known as Biscayne Bay Country.

Things to do in Miami

Have a wander down Ocean Drive

We’ll start off with perhaps one of the more glaringly obvious Miami attractions – Ocean Drive. Whenever you see something about Miami on travel programmes on TV, the chances are it’ll show Ocean Drive at least once. It is a huge road which spans more than a mile and runs right along South Beach. It features a myriad of gorgeous and distinctive Art Deco buildings, many of which are hotels. The Art Deco movement came about shortly after the conclusion of the First World War and continued into the 1920s and 1930s. Those of you into fashion should definitely check out Gianni Versace’s famous mansion as well, which is located on Ocean Drive! 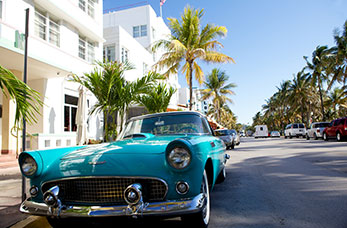 An absolutely essential part of everyone’s Miami itinerary should be Little Havana, which is located just west of the city’s downtown area. As you may be able to guess, it is named after the capital of Cuba, and has a large Cuban-American population. The area is widely considered to be one of Miami’s most socially and culturally exciting, hosting numerous festivals and events all year round.

You absolutely must make a point of visiting one of Little Havana’s delightful eateries to sample the local cuisine – you are unlikely to enjoy a better meal elsewhere in Miami. The neighbourhood is famed for its street culture and sense of community, both of which contribute greatly to fantastic and authentic cuisine.

Go for a luxurious meal in downtown Miami

As well as sampling the rustic Cuban cuisine of Little Havana, also try to enjoy dinner in one of the downtown restaurants one evening, in order to make sure you have taken full advantage of the Miami cuisine scene. The Forge is one of Miami’s most prestigious venues, and has been frequented over the years by the likes of Frank Sinatra. It is probably best described as a high class steakhouse, and as you can probably imagine it is decorated in an unashamedly ornate fashion, and it even has a wine cellar which stores over 300,000 bottles. This should probably go without saying, but you should probably dress on the smarter side of smart casual if you plan to go – whatever you do, don’t turn up in flip-flops and surfing shorts!

Coffee fans be sure to try a Cuban espresso at some point during your stay in Miami. What makes it Cuban, you ask? Well, it’s sweetened with natural brown sugar as it is being poured, which has become a local delicacy in Miami due to the large amount of Cuban-Americans residents the city has and their fondness of this method. To not have one would be to break tradition, and you know what they say about ‘When in Rome’ and all the rest of it (even though you’re in Miami).

Another local coffee delicacy to try is a cortado, which is an espresso which has a very small amount of milk added to it after the espresso has poured, in order to ‘cut’ its sharpness – the word ‘cortar’ is the Spanish verb for ‘to cut’. It was brought over to Miami’s Little Havana neighbourhood in the 1960s by Cuban-Americans, and like the abovementioned Cuban espresso is an absolute staple of Miami life.

Not many visitors to Miami need much encouragement in this department, but a great activity for the morning or the afternoon would be a good old browse around the shops. You’re absolutely spoilt for choice, as the city is packed with a great range of boutiques and fancy designer establishments.

There are also a number of indoor and outdoor shopping malls which are populated by numerous prestigious brands, so there is something for everyone in Miami in regards to shopping. The local shops also offer fantastic unique gifts and bits and pieces which will remind you of your visit for years to come and make you smile when you think of the fond memories.

Talk to the locals

The Miami locals are friendly and should be able to offer some great advice should you ever need it, and they will appreciate the fact that you’ve approached them and engaged in conversation. Like everywhere in the US, the locals are very talkative and love to make tourists feel welcome. Some of the best conversation you can have is with locals – the chances are they’ll engage you in conversation first as that’s just the way they are, so if they do, don’t be afraid to have a good old chinwag with them.

Do a bit of exploring for yourself

Though all of the above activities are ones you should definitely engage in during your stay in Miami, a good idea may be to go off the beaten track a bit and just do some good old wandering around the city with no particular aim. Some of the best experiences you can have on holidays can come from the spontaneous and unplanned moments. This also allows you to put your own stamp on your holiday so that it’s not just like everyone else’s. 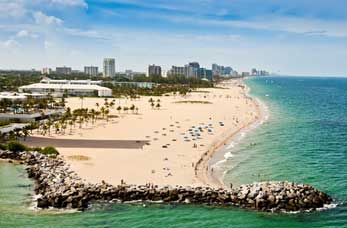 Just 23 miles north of Miami lies the historical city of Fort Lauderdale, which is now home to over 165,000 people. Though perhaps not as well-known as Miami – and only about a third as populous – Fort Lauderdale has a lot to offer visitors. It is much more relaxed as a whole than Miami, which is better for those who are looking for a more tranquil overall experience. However, there are also parts of Miami which can satisfy the needs of the mellower visitor.

The maritime area in which Fort Lauderdale is situated has been inhabited for a great many years – much further back than the city’s incorporation in 1911. It is said to have been populated by the Tequesta tribe of Native Americans, just like Miami was. When Spanish explorers arrived in the 16th century, they unintentionally brought with them a great many diseases – one being smallpox, which had dire consequences as you can imagine. As the Tequesta had absolutely no way of combating these diseases whatsoever, it meant that their tribe was very much in rapid decline, which accelerated over the next two hundred years or so. The fact that they frequently fought with a rival tribe from southwest Florida – the Calusa people – didn’t help matters, and only contributed to further acceleration of their now not so gradual decline.

When the French and the Spanish were defeated in the Seven Years’ War in 1763, Florida was given up to the British as that was part of the conditions of the Treaty of Paris. This meant that the few Tequesta who remained in Florida by this point were mostly evacuated to Cuba as a result.

During the 1830s, there were said to be only about 70 settlers living in the Fort Lauderdale area (it is perhaps worth pointing out that at this time and before the 1900s, Fort Lauderdale was referred to as the ‘New River Settlement’). In 1836, the family of one William Cooley, a local farmer and politician, was attacked by a bunch of Seminole Indians, and so all the non-native residents of the area fled (although their farms were not attacked).

The fort itself was built in 1838 and was used during the Florida War (the Second Seminole War). When the war ended, the fort was abandoned and the area was barely populated again for a good 50 years. When a ferryman came to operate a ferry across the New River in 1893, however, and the Florida East Coast Railroad finished building a route which ran through the area in 1896, things started to develop. 15 years down the line, the city was incorporated as Fort Lauderdale and was appointed as the administrative centre of Broward County when that was founded four years later in 1915.

Things to do in Fort Lauderdale

Named after the Bonnet Lily, this historic house is a must-visit place for all guests in Fort Lauderdale, with its magnificent tropical gardens and lily ponds. It was once owned by artist Frederic Clay Bartlett and his wife Helen, after it was presented to them by the latter’s father as a wedding gift in 1919. Bartlett then had the house built on the plot, which the family used as a winter home. In 1925, disaster struck and Helen died, and Bartlett subsequently got remarried to a woman named Evelyn Fortune. He died in 1953 and she died in 1997, but before she did she deeded the estate to the Florida Trust for Historic Preservation. Ever since it has been maintained and has been a popular tourist attraction due to its interesting backstory and gorgeous aesthetics.

The sun trolley is part of Fort Lauderdale’s wonderful public transport system and only costs a dollar or two. It takes you round the city’s delightfully clean downtown area and picturesque beach front. There is no prior booking or messing about involved – all you have to do is stick your arm out as you would for a regular bus and they’ll stop and let you hop aboard! A bottle of pop costs more than a dollar, so there’s no reason why you shouldn’t try it out – you’ve nothing to lose!

Film fans should visit this picturehouse which is named after the 1988 Italian film of the same name. It screens a wide variety of indie films and plays host to the Fort Lauderdale International Film Festival, which takes place every November.

Have you been to either Miami or Fort Lauderdale? If so, do you know of any good activities or attractions either offers? We’d love to hear from you, so please don’t hesitate to leave a comment in the section below – and elaborate as much as you want!