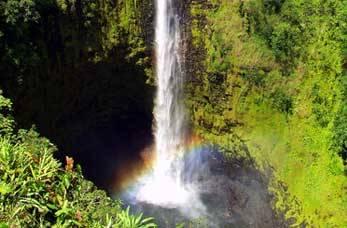 Tropical Holiday: All About Hawaii

Hawaii is a lush tropical paradise with a spectacular array of flora, fauna and wildlife. But there’s more to this exotic destination than meets the eye…

It would be fair to say that Hawaii is one of the most prestigious holiday destinations in the entire world. When we think of Hawaii, most of us picture the stereotypical tropical surroundings – namely palm trees, and the clear blue sea. It does indeed have all of these, but there is so much more to Hawaii than what you see in the brochures and on the television. There is plenty to see and do throughout Hawaii’s eight main islands, and each one offers something unique to visitors.

As Hawaii is situated in the central Pacific Ocean – almost acting as a halfway point between California and Japan – one of the very best ways to experience the Hawaiian Islands is by cruise. Flying straight there is obviously a much quicker, but where’s the fun in that?! With cruise holidays a big part of the enjoyment and excitement comes from the journey itself – which makes you enjoy your destination even more once you do get there. Your anticipation builds up whilst you enjoy a luxurious journey, and are pampered by cruise staff. You can catch up on that book you’ve been meaning to start for ages (or finish), or you can simply bask in the sun and enjoy the deck. There is something for everyone on a cruise ship, and a journey to Hawaii means that you can take full advantages of the amusements and activities on offer, due to the fact that Hawaii’s location means it takes a little longer to get to than some cruise destinations.

Due to the fact that Hawaii lies to the west of the United States of America – and is of course an American state itself – you can pick from a number of starting points. One of the very popular itineraries is flying to Las Vegas and staying there a few nights, before moving on to Los Angeles, from which point the cruise ship sets sail for Hawaii. That is just one of the many great options – there are plenty more – but it perfectly illustrates the unforgettable experiences a Hawaiian cruise holiday can offer.

Wherever your starting point is, once you set sail for Hawaii you will be able to relax like no other holiday experience allows you to. You will be able to sit back and be fully taken care of by super-friendly and ever so helpful crew members, who make it their mission to ensure that you are absolutely happy and and enjoying your cruise experience – from the moment you get on until the moment you get off. 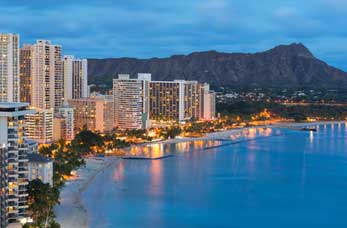 The eight main islands which make up the state of Hawaii are as follows (in size order):

1. Hawaii – this is of course the island the state is named after, and by far the biggest (it is quite rightly dubbed ‘the Big Island’). It is just over 4,000 square miles in size, which makes it over five times larger than the second biggest island, Maui. It is actually the biggest island in the whole of the United States of America’s territory. The Big Island is also the furthest south of the main eight Hawaiian Islands, and this apt nickname helps distinguish the island itself from the state of Hawaii as a whole.

2. Maui – the next biggest of the Hawaiian Islands is Maui – or ‘the Valley Isle’ as it is commonly referred to. At 727 square miles, Maui is considerable smaller in comparison to the Big Island, but it is much more densely populated (the Big Island has around 185,000 people on it, whilst Maui has 144,000 or so).

3. Oahu – the third biggest Hawaiian Island houses the state capital, Honolulu (which of course everyone has heard of), on its southeast coast. Due to this, Oahu is the most populous of all of the Hawaiian Islands – even though it is just shy of 600 square miles in size. 953,000 or so people live on Oahu, which is of course just under a million! Its nickname is quite appropriately ‘the Gathering Place’ because of its immensely dense population,

4. Kauai – said to be the geologically oldest of the eight main Hawaiian Islands, Kauai is known as ‘the Garden Isle’ because of its breathtaking scenic beauty. The island contains Waimea Canyon State Park (also referred to as ‘the Grand Canyon of the Pacific’), which is one of the most naturally beautiful sights the state of Hawaii has to offer.

5. Molokai – the fifth largest of the eight main Hawaiian Islands is Molokai, and it has an almost rectangular shape – measuring around 38 miles across by 10 miles – and with a total size of 260 square miles. Because of the visitor-friendly outlook of the locals, Molokai is dubbed ‘the Friendly Isle’, and only has just a little more than 7,000 human inhabitants.

6. Lanai – with a population of only 3,000 people, Lanai is third smallest of the ‘big’ eight Hawaiian Islands. The entire island has only one school, which carries students all the way through from kindergarten to graduation at 18 years of age. Another interesting fact about Lanai is that there is not one single set of traffic lights on the whole island!

7. Niihau – with a surface area of only 69.5 square miles, Niihau is the second smallest of the eight islands, and has no more than 200 residents at any time. It is nicknamed ‘the Forbidden Isle’ because it is pretty much completely off-limits to anyone who isn’t related to the owners of the island, invited guests of theirs, or US Navy and government officials.

8. Kahoolawe – due to its past as a US military training ground, the smallest of the Hawaiian Islands is nicknamed ‘the Target Isle’. Nobody lives on Kahoolawe and it has pretty much always been that way – mainly due to the fact that it doesn’t have much where fresh water is concerned. 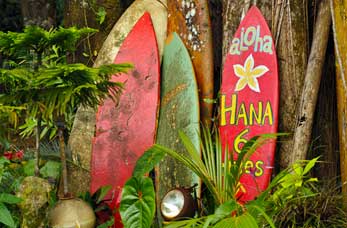 Things to do and see in Hawaii

For those who are specifically interested in World War II – or anyone remotely interested in history, for that matter – Pearl Harbor is one of the places any Hawaii visitor should set some time aside to go and experience. Located on Hawaii’s third biggest but by far most populous island, Pearl Harbor has a rich history. It has been a major naval base since just before turn of the 1900s.

Pearl Harbor is of course best known for what happened there during the Second World War. On December 7th, 1941, the Imperial Japanese Navy launched a surprise attack on Pearl Harbor, in order to prevent the US Pacific Fleet from interfering with the military actions they were planning. The attack began just before 8 o’clock in the morning (Hawaiian time), and took the Americans completely by surprise, as you would imagine.

There were reportedly just over 350 Japanese fighter planes involved in the attack, which took off from six aircraft carriers. There were almost 2,500 Americans killed during the attack, with over a thousand wounded. Not only that, but all eight of the US Navy battleships in Pearl Harbor were severely damaged, but six of them were repaired and were later used in the war.

As you will probably know, the Attack on Pearl Harbor was the straw that broke the camel’s back for the Americans – they were hitherto not directly involved in the Second World War. This attack, however, saw the United States of America declare war on the Empire of Japan, which then meant that the two other main Axis powers (Germany and Italy) declared war on the US.

Located in Pearl Harbor itself is the USS Arizona, which was one of the battleships sunk by the Japanese during their attack on the naval base. It is in fact the only one of the four battleships that sunk which was not raised. A harrowing 1,177 Marines and sailors lost their lives aboard the USS Arizona in December 1941, and 1,102 of them are buried amongst or around the wreckage.

The memorial was built in 1962 – over two decades after the event itself – and is one of the biggest tourist attractions in all of Hawaii. Though some may see it as a somewhat morbid thing to go and see, it is definitely recommended, as it helps to give you a much better insight into what went on during the attack. More than a million people visit the USS Arizona Memorial every single year, and as it is in the harbour itself it is only accessible by boat. It’s definitely worth taking half a day out for, anyway – it’s an unmissable and fascinating attraction, and the overall experience is extremely humbling.

Said to be one of Honolulu’s most popular and well-known beaches, Waikiki is also an entire neighbourhood in itself. It stretches across the south shore of the island of Oahu, and its beach is world famous for its white sand and amazing aqua sea. The name ‘Waikiki’ itself translates from the Hawaiian language into English as ‘spouting fresh water’ – which makes perfect sense once you see it in the flesh! The whole Waikiki area is not one which has only just been appreciated since the development of the islands as we know them today – in the 1800s it was frequented by Hawaiian royalty who used to enjoy watersports pursuits there! You too can walk in their footsteps and experience the present day Waikiki Beach some 200 years down the line.

Named after the waterfall it contains (one of the largest on the Big Island), Akaka Falls State Park is a must on anyone’s list. The waterfall itself is a breathtaking 422 feet tall, plunging into a deep gorge. Only 11 miles north of Hilo, the Big Island’s biggest settlement, Akaka Falls is rather easy to get to – so there is no excuse for not going! It makes a nice change from lounging on the beach, which is of course a luxurious activity, but whilst you’re in Hawaii you may as well see as much of it as you can.

Located on Oahu is the volcanic cone, Diamond Head. It is widely recognised as one of the most recognisable attractions in Hawaii, and is rather imposing once you get up to it. It is in fact a United States State Monument, due to the sheer unusual nature of it. Though quite a bit of Diamond Head is used as an antenna platform, the part of it which is closest to the hotels and resorts is not – and is easily accessible. Definitely something to go and see, Diamond Head is one of the Hawaiian sights which will stay with you long after your holiday is over!

This 10-mile-long canyon on Hawaii’s (geologically) oldest island, Kauai, Waimea Canyon State Park offers some of the most stirring natural beauty you will ever see – in the entire world, not only Hawaii. The colour and the shape of the canyon is truly unique and unmistakably Hawaiian, and this is possibly the one place you absolutely do not want to forget to bring your camera for! You can probably take it all in within half a day – and is equally gorgeous in the morning and the evening. In certain points it is around 3,000 feet deep, which sounds a lot on paper but is even more astonishing in person. 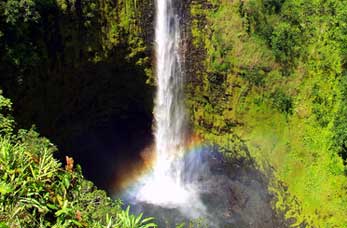 As well as the amazing natural beauty you will witness first hand once you get to Hawaii, be sure to make the most of the rest of the experience – the cruise especially! The cruise staff are there to make your journey to Hawaii as luxurious as possible and are happy to help improve the experience any way they can. Cruising is the best way to approach the Hawaiian Islands, because you will be able to appreciate them fully. If you’ve always thought of booking a Hawaiian cruise, what are you waiting for?!