Prepare to fall in love with the romantic city of Rome.

There are few places in the world which have succeeded in ensnaring the imagination of travellers and romantics more than the city of Rome. In fact, tourists and pilgrims have been visiting Rome for 3000 years; each mesmerized by the ruinous beauty of the city. For those of you who visit Rome via a cruise, you’ll never be disappointed by the variety and sheer depth of history which encapsulate the city. The great thing about Rome is that you do as much, or as little, as you like. The majority of the city can be explored on foot; allowing for a greater level of flexibility than other European capitals. 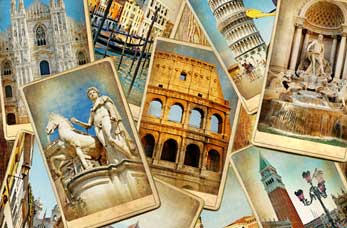 In a city like Rome, it’s easy to feel overwhelmed by the sheer variety of sites and museums on offer. You want to be able to see as much as possible – but, at the same time, you don’t want to tire yourself out. A great cruise offers people the opportunity to relax and get pampered. That’s why we’ve taken the time to hand-pick the best places to visit while you’re in Rome. We’ve done all the hard work so you can just enjoy being on your cruise.

A Brief History of Rome

Before we look at the must-see sites of Rome, here is a brief history of the eternal city. It’s much easier to appreciate this beautiful capital once you orientate yourself with the local history. After all, Rome is nothing without it’s fascinating and palimpsestic history of kings, emperors, and popes.

The city of Rome is positively adorned with the ruinous and multi-layered architecture of its ancient past. As the legend goes, Rome was founded on the 21st April 753 BCE by Romulus and his brother Remus. The demi-gods feuded over who would be king of Rome; resulting in Romulus murdering Remus, crowning himself, and naming the township after himself. Even in during the 1st Century BCE, Roman historians claimed that the hut of Romulus was still preserved on the Palatine Hill.

This is a common myth associated with the foundation of Rome, but archaeological evidence would suggest that area had been inhabited for several hundred years before the 8th Century BCE.

Before there were emperors in Rome, there were 7 Roman kings who ruled over the city for over two hundred years. However, in 510 BCE, there was a revolt in Rome and the kings were overthrown and the city was established as a Republic. The Senate now had control over Rome, made up of local aristocrats, and the 12 Law Tables were later published (450 BCE).

In the early Republican period, Rome became enthralled in a series of gruesome wars with Carthage (modern day Tunisia) over control of the Western Mediterranean. Known as the Punic Wars, Rome was sacked and faced near annihilation by Carthaginian leader Hannibal. However, Rome’s enemies were soon defeated when Carthage was sacked and its agricultural lands destroyed with salt.

As Rome’s influence continued to grow, so did the individuals who profited from expansion and increased military prowess. During the Republican period, Rome managed to bring Spain, Greece, Egypt, and Britain under its control. In order to control these provinces, a series of influential men were given authority over these dominions; this included Julius Caesar, Marc Antony, Octavian, Lepidus, and Pompey. It was Octavian, later who became Augustus, who was left behind in Rome and was able to cultivate his power. Through a series of smear campaigns and after the murder of Julius Caesar, Octavian met Antony and Cleopatra at the Battle of Actium in 31 BCE. Octavian was victorious, Antony committed suicide, and the Ptolemaic dynasty of Egypt fell into Roman control. 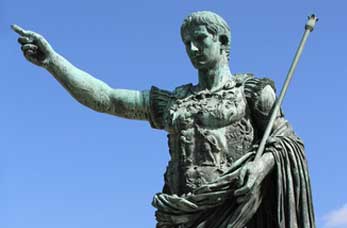 With no other adversaries left, Octavian became the sole ruler in Rome and thus the Roman Empire was born. During this time, the city went under a series of radical transformations and became the epicentre of cultural, political, and economic prowess in the Mediterranean. Some of the most beautiful works were constructed during this time; such as the Colosseum, Pantheon, and the lesser known aqueducts of Rome.

When Constantine the Great converted the Roman Empire to Christian in the 4th Century CE, Rome itself changed drastically. The capital of the empire was moved to Constantinople – the city of Constantine – located in modern day Istanbul. During this period, Rome’s population dropped significantly and the city became victim to a series of sacks and invasions. Although a population always remained in the city, Rome wasn’t to carry significant importance again until the Renaissance period.

While many people think of Florence during this time, Rome was also a pioneering city throughout the Italian Renaissance. The infamous Borgias Pope, Alexander VI, was responsible for collecting and preserving some of the most beautiful treasures from Roman antiquity. He constructed a large library to house his ancient manuscripts and commissioned some truly beautiful works from the leading Renaissance artists of the time, including Raphael and Michelangelo.

Following the death of the Borgias Pope, Julius II was chosen as the new papal leader of Rome. He was responsible for refurbishing St. Peter’s Basilica and paid Michelangelo to design the beautiful dome. Julius II was also an avid supporter of the arts and helped revitalise Rome during this time. It was partly due to these men that Rome became a thriving and culturally-dominating city throughout the Renaissance.

The Forum Romanum is one of the oldest and continually built-upon public spaces in Rome. During the Republic, the forum contained various temples, shops, and courtrooms for the Roman people. However, it was during the Imperial period that the forum became particularly extravagant. 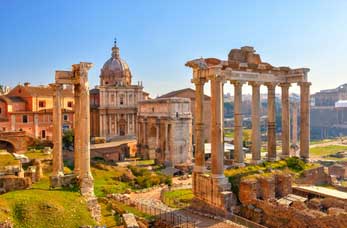 The Forum Romanum is a large site, so it’s worth taking the time to see everything properly. One of the most impressive structures within the forum is the Arch of Titus. The Arch commemorates the Jewish Wars of 79 CE; showing Titus’s men parading through Rome with the menorah they stole from Jerusalem’s Second Temple. There are also several beautiful temples and sites worth seeing in the forum – such as the House of the Vestal Virgins and Senate House.

The Pantheon, meaning ‘many gods’, was first constructed during the reign of Augustus. It was later refurbished by Hadrian and served as a temple of worship for several hundred years. It is a truly beautiful building and now acts as a church for Rome’s Christian population. With marble columns and beautiful mosaics, it’s certainly not worth missing.

Entrance to the Pantheon is free, but you must be properly covered to enter the site. This means no shoulders or knees.

As the first Emperor of Rome, Augustus created a mammoth mausoleum dedicated to himself and his family in 28 BCE. He build his mausoleum in the Campus Martius; an area of Rome typically associated with the Roman army. However, under Augustus, the Campus Martius went under a series of renovations and was turned into a green public space.

The Mausoleum of Augustus is a site definitely worth visiting. Additionally, it’s located next door to the Ara Pacis Museum. The Ara Pacis, or the Altar of Augustan Peace, is a beautiful marble altar dedicated to the emperor by the Roman senate. It shows Augustus as a pious family man, surrounded by loved-ones and leading political figures. There is a small entry fee, but it’s definitely worth not missing.

The image of the Colosseum is undoubtedly the most famous landmark in the city of Rome. Today it’s a popular tourist attraction and can be easily accessed through guided tours. It’s recommended that you book your tour in advance; this will allow you to skip the long queues. 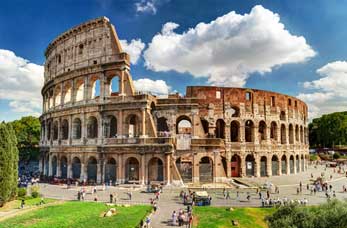 Following the sack of Jerusalem (79 CE), emperor Titus brought back the spoils of war to the city of Rome. In order to commemorate his victory, he began the construction of the largest concrete amphitheatre throughout the Empire. The Colosseum was completed by his heir, Vespasian, and solidified the memory of the Flavian dynasty in the city.

According to contemporary writers, the Colosseum was unrivalled in its spectacle and brutality. The Roman author Juvenal described the Colosseum as a place dedicated to ‘bread and circuses’. Millions of lions, giraffes, and elephants would be transported from across the Empire to be slaughtered by the gladiators. The Colosseum was so technologically advanced that the arena could even be flooded to reenact famous naval battles.

Of course, the Colosseum was also a site for public executions. Anyone who has ever seen the film Quo Vadis or Gladiator will know that Christians were commonly burnt and crucified in the arena. Regardless of its gruesome history, no tourist can visit Rome without seeing the Colosseum.

It’s difficult to do any justice to the Vatican in a short blog, but this is an absolute must-see. As legend goes, the Vatican Hill was originally a Christian burial site long-before it was the Vatican complex was constructed. However, during the 1st Century BCE, one of Jesus’s Apostles, Peter, was crucified and buried on the hill. Peter’s name, coming from the Greek Petros, means ‘rock’; the rock on which Jesus would build his church (Matthew 16:18). The Vatican is thus built upon the alleged tomb of St. Peter.

There is simply so much to see in the Vatican. Most tours take around 6 hours, so bring your comfortable shoes. From the Vatican Museum, to the Sistine Chapel, and St. Peters Basilica (partly designed by Michelangelo) – the Vatican is a breathtaking experience. Book in advance to avoid the inevitable long queues.

However, the Castel has often served as a place of refuge for popes who were in imminent danger. A special bridge was constructed between the Castel and the Vatican; offering the pope a quick and safe way to avoid capture. Castel San’Angelo also served as a fortress and papal prison for several hundred years.

Summary: Why you should visit Rome

A cruise is a fantastic opportunity for individuals to relax and enjoy the luxury associated with premiere travel. If, however, you like a little bit of adventure, then you must visit Rome. It’s a cliche, but there are few cities in the world as beautiful and engaging as this one. Rome allows for complete flexibility; you can walk all around the city centre and there is an endless supply of restaurants and bars.

Rome is also one of the most fascinating cities in Europe. It has been continually occupied for over 3000 years – making it a truly ancient site. Not only is Rome a cultural capital of the world, it’s also a religious centre which millions of visitors flock to every year. If you want to get the best out of Rome, avoid visiting in peak seasons like Easter and Midsummer. Even the current Pope leaves the city during this time because it’s too hot.

Many of its famous buildings are still intact and you can purchase tourist passes to visit the various wonders. Book in advance and don’t miss a thing. Rome is truly memorable city that can be visited again and again.