It could be said that Hollywood is the world’s most glamorous travel agent, with the movie studios now filming in unusual and exotic locations across the world, attracting tourists who want to visit the places they have witnessed up on the big screen. When a movie trilogy such as Peter Jackson’s The Lord of the Rings utilises a location such as New Zealand, it is not just audiences who react – the travel industry is not far behind in sitting up and taking notice. ‘Destination marketers’ around the world are always looking for new ways to capitalise on the power of ‘film tourism’, the concept whereby tourist destinations are made famous by films and television shows.In this Cruise Nation blog post, we will be taking a look at the unusual places which have seen a stark increase in the numbers of visitors due to their inclusion in films and television programmes. Many of the hotels and booking agents have experienced an increase in business (both short & long term) following the release of a feature where their city, town or even entire country was included. Tourists are now more cultured than ever, and can now be more selective with the destinations and activities they choose when looking to take a holiday.

The tourism industry is very competitive when it comes to trying to attract tourists to their destination, and now tourism marketers simply cannot wait for couples or families to just choose their location over thousands from across the world. Film or movie-induced tourism is now an effective way to entice new visitors whilst growing the market share of an area. Destination Marketing Organisations are finding new ways to position their destinations and are now differentiating them by encouraging movie and television studios to come and use their location in order to create a larger pull factor.

Visitors want to recreate scenes from their favourite movies, and the inclusion of an already famous historical location can enhance its desirability even further by taking its place in a scene, or even the whole narrative of a feature. Whilst it is not exactly a new phenomenon and tourists have visited filming locations for years, it is only recently that the term ‘movie-induced tourism’ has come to fruition.

Vienna was encapsulated in 1948 noir film The Third Man, and to this day it remains a hotspot for tourists, especially the Wiener Riesenrad where characters Holly Martins (Joseph Cotten) and Harry Lime (Orson Welles) met for an infamous chat and highly influential monologue which reveals the true extent of the Lime’s ruthlessness. This was my first exposure to film-tourism when visiting the city with my parents who were both big fans of the film. Whilst this example is not included in my list, it just goes to show that shooting locations from years gone by always have, and will continue to be highly desirable locations for tourists to visit.

Initially the plan was to stick to the big screen when planning this blog, but the recent trend for high quality television series has led me to include a couple which are shot in locations which have not traditionally been known for attracting lots of visitors, namely Northern Ireland and Albuquerque. 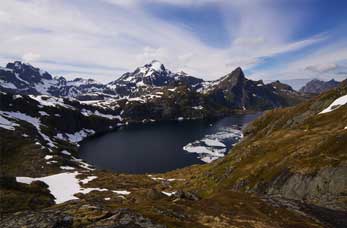 Not only has the Disney movie Frozen led to box office profits, thousands of items of merchandise and increases in visitors to the Disneyland resorts around the world; it is also leading fans to visit Norway so that they can experience the landscape that inspired the setting for the movie.

There has been a 37% increase in hotel bookings this quarter since the film was released last November, when compared to the same period in 2013. Oslo Airport Gardermoen have also reported a 57 per cent increase in arrivals from New York City during the same quarter. There is also the Disney tour company who are offering eight day trips to the region which don’t come cheap, at around $5,000 per person.

It has become a great family event. The trip offers culture for parents and ensures that the children don’t get bored. The landscapes and architecture in the movie are as stunning as the real places – visitors can also witness the beautiful northern lights whilst on their trip, which for many, is a once in a lifetime opportunity. 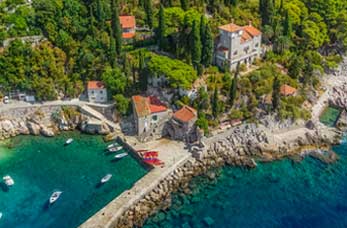 At the time of writing, the fourth series of epic fantasy drama Game of Thrones is just drawing to a close and the shooting for the series has taken place in numerous locations across the globe. The reason being that the world of Westeros which novelist George R. R. Martin created spans such an expansive area, with the icy northern territories and the famous ‘wall’ to the sunnier climes of the southern regions of the seven kingdoms. Shooting has taken place in Belfast (on location and in a studio), Malta, Scotland, Iceland, the United States and Morocco.

Of course, a holiday to all these different destinations would be one hell of an adventure; perhaps one akin to The Hound and his young apprentice Arya Stark take on the show itself, but the two main holidaying destinations are that of Croatia and Iceland – so lets concentrate on them.

The beautiful walled towns along Croatia’s adriatic coast have been used as the backdrop to scenes based in Kings Landing on the show. Dubrovnik has seen a large increase in visitors who can now partake in a walking tour which takes in the locations in which the trials and tribulations the Lannister family have gone through in their battle to keep the Iron Throne.

In a bleak contrast, you can also visit the shooting locations for the northern parts of Westeros, or Iceland as it is known as in real life! The Series Director Janet Graham said of the shoot: ‘For the Far Northern locations of Game of Thrones, we wanted something shatteringly beautiful, barren and brutal’. Iceland’s Thingvellir National Park has certainly provided that. During shooting, around 300 cast and crew head to the park where they need special permits to do so.

If you’re after a sunnier getaway or even a wintery escape, the whole family can get involved in the magic of Game of Thrones and become a part of the mystical battles the seven families of Westeros. 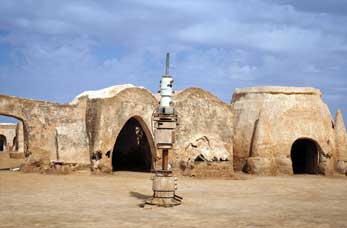 Many thousands of diehard Star Wars fans make the pilgrimage to Tunisia each and every year. It’s the setting for the planet of Tatooine which is the Skywalker family’s home planet during the movie series. Visitors can see the oasis town of Tozeur and the salt lake of Chott-el-Jerid before travelling to Mos Espa which is still very well preserved. Other shooting locations include Sebulba’s cafe from Episode I: The Phantom Menace and the Pod-Racing arena.

It’s not just George Lucas’ movies which were shot in the area; just a short journey away you will find the locations for Oscar-winning motion picture The English Patient – so there is something for everyone in the family if Tunisia is your chosen holidaying destination. Situated next to the Mediterranean, the climate is a mixture of the cooler Med winds and the hot heat of the North African deserts. There are plenty of beach resorts and movie locations to visit which make a weeks break packed with varying activities. 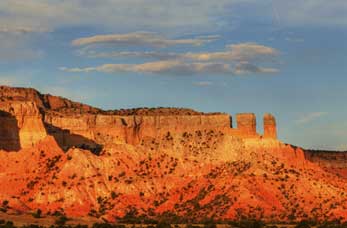 The American city of Albuquerque is situated high up in the deserts of New Mexico. The area enjoys 310 days annual sunshine and was the backdrop for AMC’s Breaking Bad as it ran for seven seasons before finishing in 2013. Bryan Cranston, who stars as meth-cooking kingpin Walter White, said of the city: ‘Albuquerque itself has become a character in our show. A really important character in our show, it gave it a justifiable location, sound and was a place that not many people could have related to before’.

Visitors can now go on guided or self-guided tours of the area and take in the White’s house, fast food outlet Los Pollos Hermanos, and the many haunts of the show’s young antihero Jesse Pinkman, played by Aaron Paul. Visitors from around the world have visited Albuquerque to pay homage to the show which picked up plenty of different awards, and the city is really cashing in on the cult status that the programme gained throughout its airing and has sustained ever since.

The Lord of the Rings 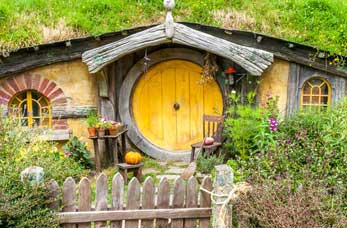 The stunning locations of Peter Jackson’s The Lord of the Rings and The Hobbit movie series have captivated fans all across the world. The books which were written by J.R.R Tolkien have been perfectly reimagined in the movies which were filmed all across the two islands of New Zealand. Tourists can easily access all the major shooting spots, including the Hobbiton set, this is because they are neatly all situated near other major landmarks or towns. The main hub for the shooting of the movies is in Wellington where there is world class production facilities, visitors can either take self-guided tours or embark on an organised trek which allow you to take in the many stunning vistas of Mordor and Middle Earth.

The third film in the Hobbit trilogy is set to be released in late 2014 which will no doubt increase the interest in the country even further. 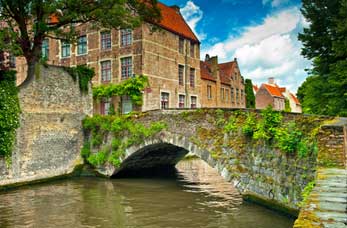 The beautiful medieval city of Bruges was the location for Martin McDonagh’s wonderfully written, scripted and acted dark comedy movie In Bruges. The locations in the film are very much a part of the script and include many of the fantastic attractions including the Belfry in the Grote Markt and the Relais Bourgondisch Hotel where the characters Ray (Colin Farrell) and Ken (Brendan Gleeson) stayed during the duration of the movie.

While Bruges has long been a popular destination for tourists from across the world, In Bruges awakened the eyes of many more, younger people, to the beauty of the city. The picture painted in the film is unique, if you haven’t seen it, you should certainly try and get hold of it as soon as possible, before then looking online for the cheapest flight to Bruges!

There will always be the cult shows which attract visitors to the filming locations, personally I would want to visit New York City but I am probably just as interested in travelling across the Hudson River to Jersey to pay a visit to the locations used in HBO series The Sopranos. Satriale’s Pork Store is a highly popular attraction, and of course you can also take a ride on the New Jersey Turnpike which is encapsulated in the now iconic opening title sequence. Then again, I’d also like to include a trip to the Los Angeles locations where David Duchovny’s comedy Californication is set. Everyone will have their own taste in movies, television and culture so there will be thousands of different reasons that people want to visit numerous locations all over the planet.

Movie locations are now a major pull for visitors when looking for places to visit; they showcase the beauty and the landscape of an area like no other medium can. Movie producers and tourist boards are now in cahoots more than they have ever been, as they try to capitalise on the fantasies of television and movie fans. Just imagine the numbers of people who have climbed those famous steps in Philadelphia which Sylvester Stallone climbed up in Rocky – the growing influence of the big and small screen in tourism really is something that tourist boards will be licking their lips over.

Are there any specific locations that you want to visit due to their inclusion in a movie or a television show? You can leave a comment below or join in the conversation on Twitter. Thanks for reading and happy holidays!