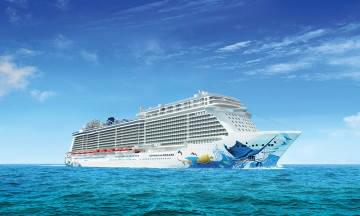 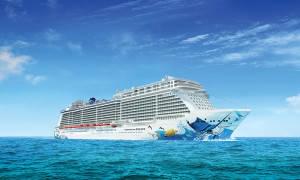 We’re just months away from the official launch of the Norwegian Escape cruise liner at the end of October this year and we thought it was time we gave you the inside scoop of what exactly you can find onboard this incredible new ship.

Want a closer look? Check out our gallery of some of the main areas of the ship below…

Earlier this week, the Norwegian Escape was floated out from it’s dock in Meyer Werft. It’s worth taking a look to appreciate the sheer size of the ship as well as catch an up-close glimpse of the colourful paintwork decals which make it instantly recognisable.

The Norwegian Escape is part of Norwegian Cruise Lines Freestyle Choice, which means you’ll benefit from:

The ship has an overall length of 1,065ft and on the top deck you can find the beautiful Spice H20 Bar nestled next to a waterfall grotto which looks like it’s been picked up straight out of a tropical paradise and placed onboard for you to enjoy. If you’re interested in seeing even more of the ship, check out the official Norwegian Escape website.

What do you think of the Norwegian Escape? Are you planning a cruise on it? If you’d like to find out more about the prices for cruise holidays on this liner, check out our latest deals.

Which feature do you like best about the Escape? Let us know in the comments below!