From the striking city skylines of Toronto to the charming autumnal colours of Nova Scotia, Canada and New England are our new favourite cruise destinations.

Cruising around Canada and New England, right up in that northeast border area, is a wonderful experience – as anyone who’s been on such a cruise will tell you. You will of course enjoy all the same luxurious treatment onboard as you would if you were cruising in the Caribbean, or Florida, or Hawaii, whilst seeing an extremely underrated part of the world.

Many British holidaymakers find that New England is like a paradise on earth for them. It has hints of Britain throughout its wonderful landscape, yet is distinctly American. Its architecture is picturesque – we’ve all seen those New England houses on films and television programmes – and the scenery is utterly breathtaking. New Hampshire and Maine are gorgeous all year round – gloriously warm and sunny in the summer, whilst delightfully snowy and incredibly cold in the winter.

The great thing about many cruises to New England and Canada is that they incorporate stop-offs in New York in their itineraries. New York is one of those cities you can visit again and again – it’s certainly doesn’t fall into the ‘already seen and done everything there’ category, because it’s so huge and there’s always something to do. You could spend two weeks in New York and still not see everything there is to see – you can only really comprehend the enormity of the place once you’ve been there.

Many cruises to Canada and New England actually set sail from New York – depending on your itinerary you will either fly to New York and stay there a few days before setting sail, or you will fly to Toronto, spend a few days there, then visit Niagara and from there get the Amtrak Rail to New York. 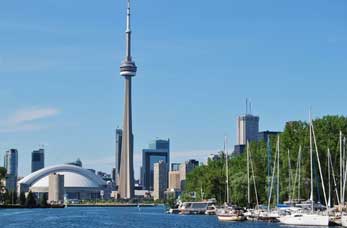 Many people mistake Toronto for Canada’s capital city, but this is in fact not the case. It is indeed the largest city in all of Canada, and is also the capital city of the Ontario province, but the country’s capital is in Ottawa – which, confusingly enough, is also in Ontario! Ottawa is a beautiful city too, but it is much smaller than Toronto – the latter is the one city in Canada you should definitely visit; it’s incredible and there’s so much to do.

When you fly into Toronto before you embark on the actual cruising part of your trip, you’ll see the enormous Lake Ontario. Toronto lies on the northwestern shore of Lake Ontario, and it’s actually rather easy to mistake the lake as a sea upon first glance (it covers 24,000 square miles and has an average depth of just over 280 feet).

There are a great deal of sights to see in Toronto, so let’s start with perhaps the essentials:

When it was built in 1976, the CN Tower was the tallest free-standing structure in the world and the world’s tallest tower; it still is one of the tallest free-standing structures in the world, for that matter, standing at 1815 feet in height (including the antenna spire). It’s definitely worth the entry fee to go up the CN Tower, as the views to be had up there are utterly astounding – there are no two ways about it. Also, it has its famous glass floor feature, which – if you dare – you can walk on top of whilst looking down below. Certainly don’t forget to take your camera, as you’ll never forgive yourself if you don’t get some snaps of the tower and the views you’ll enjoy when up in it.

For those of you who enjoy a bit of shopping, you must make sure you visit Toronto’s Eaton Center at least once during your trip. In there you’ll find all manner of designer shops, such as Lacoste, Abercrombie and Fitch, Armani Exchange, The Gap, Zara, and a whole load of others; there’s something for everyone at the Eaton Center. You can also browse its numerous large bookshops, enjoy a coffee at Starbucks or Second Cup (a big Canadian competitor of Starbucks’, who make delightful coffee, by the way), or enjoy some good old fashioned fast food in the food court. You can lose hours in the Eaton Center, so keep an eye on your watch – or alternatively, buy yourself a new one whilst you’re in there!

Toronto is home to the world famous Toronto Maple Leafs ice hockey team, as well as Major League Baseball (MLB) team the Toronto Blue Jays, and National Basketball Association (NBA) team the Toronto Raptors; so whatever your taste in North American sports, there’s something for you in Toronto! For those of you who are fans of football (our football!), Toronto even have a Major League Soccer (MLS) team now – Toronto FC – who were founded in 2006. Obviously the sports going on in Toronto are seasonal, but with any luck no matter what time of year you visit, you’ll be able to catch at least one!

Located pretty much exactly between the North Pole and the Equator, Nova Scotia is one of Canada’s most beautiful provinces, and one of the country’s favourite holiday destinations. Its maritime location also make it absolutely perfect for cruise stops, and the province capital Halifax actually lies right next to the Atlantic Ocean. 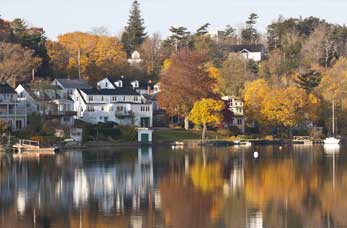 One of eastern Canada’s main cities, Halifax is rather large and extremely important in regards to the country’s economy. With a history dating back to the mid-1700s, it’s somewhere you can go and indulge in the sights and the architecture, of which there is a great blend and variety. Here are some of the main attractions in Halifax and around the surrounding area:

Situated right at the entrance to Halifax’s harbour is the island of Sambro – a well-known rural fishing community which lies on the Chebucto Peninsula. The Sambro Island Lighthouse is actually the oldest in North America, and has been there since 1758. A definite photo opportunity, the Sambro Island Lighthouse looks very much like something you’d expect to see over the border in the state of Maine, with its distinctive and iconic pepperpot styling which is synonymous with those northwestern American states.

This small rural community which is situated on the eastern shore of St. Margaret’s Bay is an absolute must for any tourist. It’s only around 25 miles or so southwest of the province capital Halifax, and offers visitors breathtaking views and a truly unforgettable day out.

The place has a rich history – it was founded in 1811, and is said to be named after St. Margaret’s Bay which it of course lies upon (‘Peggy’ is short for ‘Margaret’, traditionally); there are other theories regarding the name but this is the most popular one, due to the fact that it seems totally logical.

The Peggy’s Cove community traditionally supported itself by fishing, however, around the time of the Second World War it became an extremely popular tourist destination. There is still a fishing element to the area, of course, and a large part of that involves fishing for lobster – which you’ll be able to see when you visit.

Now that we’re done talking about the Canadian side of things, we’ll move onto the two American cities which you will likely visit on a cruise to Canada and New England. We’ll miss out New York (even though your cruise may well involve a visit to that wonderful city), because we’ve blogged about it before! You can read our New York blog here. 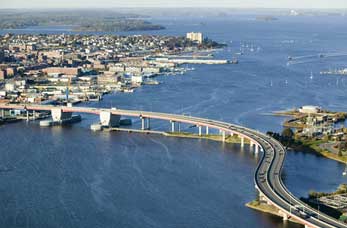 The biggest city in the state of Maine, Portland is another of those cities which is situated right next to the Atlantic Ocean, making it a magnificent stop for cruise ships!

Given that the northeastern coast was where the first English settlers to America arrived, Portland has an incredible heritage and played a large part in the creation of the country as we know it today. The first European settler in the Portland area is said to be a Captain Levett who was given 6,000 acres of land by King Charles I of England – and this was the year 1623! However, this settlement wasn’t permanent, as Levett returned to England to write about his journey; it was not until a decade later in 1633 that the first permanent settlers came to the area.

Portland is the perfect destination for anyone interested in the history of the United States of America – it’s got a mixture of wonderful architecture, some modern and some very old indeed and with a fascinating story to tell. It’s probably not one of the cities you’d first think of if someone said “northeast USA” to you, but that’s what makes it such a wonderful city to visit – it’s understated and underrated. It’s recognised as one of the cultural hubs of America, and appeared on GQ Magazine’s ‘Coolest Small Cities in America’ list one year. That should tell you all you need to know.

As many of you may well know, Boston played an almost incomprehensibly pivotal role in the American Revolution – and was of course the setting of the Boston Tea Party, the Boston Massacre, the Siege of Boston, and the Battle of Bunker Hill. When the country emancipated itself from Great Britain, Boston was one of the most influential cities – seen as a cultural and educational hotspot.

Below are two of the key places you should go during your stay in Boston, but there are many more things to do in addition to them of course, so make sure you plan out all the places you want to go to or you’ll miss out!

Make sure you have a good walk around the Harvard University campus when you visit Boston, as it’s arguably the most famous university in the world (certainly one of, alongside Princeton, Oxford and Cambridge) – definitely the most famous university in America. The architecture is renowned and iconic – and for a reason. The Harvard buildings will provide great photo opportunities, and there are several gift shops in the surrounding area at which you’ll be able to get your Harvard t-shirts and hoodies and other such items!

Home of the Boston Red Sox, one of the most famous and accomplished baseball teams in the history of the sport, Fenway Park is another must-visit place – whether you like the sport or not. It’s a fascinating place and has been renovated and developed continuously since it was opened over a century ago in 1912. Unlike many football grounds we have in the UK, however, the actual capacity of Fenway Park has not increased that much over the years: when it was opened in 1912 the capacity was 35,000, and today it is only a couple of thousand more than that (though it is undoubtedly much safer and more comfortable for all spectators now).

Why not go on a cruise to Canada and New England?

Did you enjoy this blog and find it insightful? If you have anything to add that you think we might have missed out, please feel free to share your thoughts or additional points in the comments section below – we’d love to hear from you!