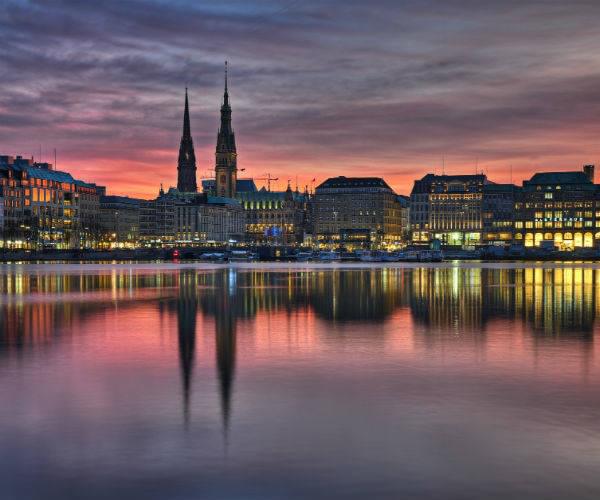 Hamburg – A Story of Survival

From the second you step foot in this stunning city you will feel an air of resilience, not only in the time-worn buildings but in the people too. And it’s little wonder – the port city of Hamburg has done its fair share of rebuilding to get to the place you see today.

Standing at the point where the rivers Elbe, Alster and Bille meet, the early foundations of Hamburg were (and still are today) penetrated by canals and waterways that allowed for lucrative trade between local residents and neighbouring settlements. But the easy access also made it a prime target for attack – and in the 9th century came just that.

The Viking King Horik and a fleet of no fewer that 600 ships raided and plundered the settlement, burning to the ground the main buildings – the church, monastery and library – an taking prisoner the population of around 500 Christians.

Hamburg and it’s people survived the Viking raids and, for the first time of many, rebuilt the town only for it to be destroyed again less than 40 years later by Danish and Slavic soldiers. Again, the determination and strength of the people meant that survival prevailed and Hamburg was rebuilt.

Over the years Hamburg continued to grow and established itself as one of the most important ports in the world, finding prosperity in the trade of fabrics, salt and beer. As you wander through the streets and along the banks of the canals, you can still see some of the medieval merchant’s houses that were part of the old city, complete with the winches and hooks that were used to load and unload goods from higher floors.

Sadly there aren’t too many of these merchant’s houses left, as most of the old city was devastated by the Great Fire. On 5th May, 1842 a fire started in a cigar factory and dry conditions, timber buildings, changing winds and the storage of materials such as rubber, meant that it blazed for three days, ravaging the city, before it was finally extinguished.

Today the original location of the cigar factory is now a restaurant, Zum Brandamfang, which translates to ‘Where the fire started’. Here you can enjoy a mixed fish platter for a very reasonable 25 euros, while taking in views over the canal.

After the Great Fire, the city of Hamburg wanted to show the world that it was damaged, but it was not destroyed. And so, a new City Hall was built right in the heart of the city, where it still stands today. The impressive facade of the building tells a story of the ages, with ornately carved statues of the merchants and Emperors who each played a part in the history of Hamburg.

Most significantly, a statue of a Phoenix takes pride of place above the entrance, an undeniable symbol of how the city and its people have risen from the flames. Latin script can also be seen above the main doorway which translates to ‘I will rise again’, a sentiment that is felt throughout Hamburg.

No sooner had the city had fully recovered from the Great Fire, that an attack of a different kind befell the people. The cholera outbreak in 1892 was the biggest Germany had seen, with 8,526 people losing their lives. It is of little surprise that a disease caused from consuming contaminated food or water spread so quickly in a city like this.

The waterways were unclean and the outbreak lead to an investigation into water hygiene. When visiting, be sure to take a look around the back of the City Hall. Here you will find a small, but significant, fountain dedicated to Hygieia – the Goddess of Health and Hygiene. The fountain was placed in remembrance of the victims of the outbreak, and the dragon that Hygieia is slaying represents the disease in yet another show of strength and survival from the people of Hamburg.

Little over half a century later and the world was at war for the second time, and Hamburg was the target of one of the biggest aerial strikes by allied forces. From 24th July to 3rd August 1943, relentless bombing of the city created what is known as The Hamburg Firestorm. A spell of hot, dry weather lead to the sparks from the bombs catching fire, and the winds that are felt throughout the city created a hurricane-like fire storm that ripped through the buildings, turning Hamburg into hell itself.

Yet again, from the devastation of war, the city and its people rebuilt – but not everything was restored to how it had been before. St Nicolas Church (once the tallest building in the world from 1874 to 1876), having already been rebuilt after the Great Fire, was for the most part destroyed again during the bombings. Rather than restore the church to its former glory, it was decided that the remaining ruins would stay as they were – a constant reminder of the horrors of war.

Survival of another kind can also be found in this fascinating city. The Saint Pauli district gained a notorious reputation in the 17th century as the Red Light District, as it was here that sailors would come for ‘entertainment’ during their stay! The Chinatown area of Saint Pauli was closed down by the Nazis in the 1930’s, but has since reestablished itself in the district.

Numerous social issues and conflicts have taken place over Saint Pauli, with many Hamburg residents arguing that the less than favourable reputation of the area was bad for the city, yet despite this it continued to thrive – and was even the place of choice for The Beatles at the start of their career. From 17th August 1960, for 48 nights, they played in the infamous Indra Club – which is still open and drawing crowds today. Between August 1960 and December 1962 the band played in various clubs along the raucous strip, with John Lennon quoting ‘I might have been born in Liverpool – but I grew up in Hamburg’.

Walking through the area today little has changed. Bright lights lead the way to bars and clubs that attract party-goers from around the world. If you are looking for a wild night out then this is the place for you! If quieter nights are your thing, it’s still highly recommended that you take a stroll through Saint Pauli – even if it’s just for people watching!

Hamburg is a city full of feeling and character, and as you saunter through the streets and over some of its 2,500 bridges (more than London, Venice and Amsterdam combined!) you can’t fail to notice the high-end shopping stores standing alongside battle-scarred churches in a show of pride, both for where the city once was and of how far it has come.

It is definitely worth spending at least a few days here, and to make your visit more enjoyable here are some Insider Tips:

Have you been to Hamburg? If not, book your 2021 cruise with Cruise Nation today!