Why Cruise Holidays are the Best Way to See Alaska

Wild and magical, Alaska is a land which everyone should explore. Find out why cruises are the best way to do it.

Alaska has long been a place the adventurous and the bold have found themselves drawn to. Its unrivalled natural beauty draws in naturists like a magnet and mesmerises them. The word stunningis sometimes used a bit too freely and eagerly, but that is the only way to describe the landscape of Alaska. One could quite easily spend hours online looking at photographs of its various mountains, lakes and landscapes which, without meaning to sound too dramatic and over-the-top, are enchanting and awe-inspiring. At the same time, though, it is utterly terrifying in a way: its enormity and that abundance of unspoiled natural beauty sort of makes us aware that we, and our time, are just a tiny part of an incomprehensibly bigger picture.

It has only been a US state since 1959, but Alaska has a complicated and interesting history. Some background information and a very brief history of Alaska. Alaska could probably not be any more appropriately-named. It is the Russian take on the Aleutian word Alakshak, which is said to translate to great land(the Aleutian Islands lie between the Kamchatka Peninsula – which is at the far east part of Russia – and the Alaskan Peninsula).The Russian colonisation of Alaska is believed to have begun at some point in the first half of the 17th century. More than 200 years later, in 1867, the USA essentially bought Alaska from the Russian Empire. Despite being roughly twice the size of Texas, the USA did not initially see Alaska as a particularly valuable addition to the country. That changed in 1896, though, when the Klondike Gold Rush began and thousands of prospectors raced up in search of success and riches. Up until 1906, the capital of the Alaska Territory (as it was then referred to) was Sitka, but then changed to Juneau, which is still the capital now.

During the Second World War, Japanese forces occupied two of the Aleutian Islands – Attu and Kiska – and the Allied struggle to remove them lasted just over a year, starting in June 1942 and ending in August 1943. The Aleutian Islands Campaign is a somewhat forgotten battle of World War II, perhaps because it ran partly simultaneously with the much higher-scale Guadalcanal Campaign, which famously took place in the South Pacific. That said, almost 1,500 American soldiers lost their lives in the Aleutian Islands Campaign, with a further 3,400 or so wounded, whilst the Japanese lost more than 4,300 men. In 1946, the year after the war ended, the wheels started turning on a campaign to make Alaska a US state, which was finally approved by US Congress some 12 years later in July 1958. Alaska was officially declared a US state on January 3rd 1959.

Why so many choose to experience Alaska by cruise?

Wild surroundings by day, luxurious comfort by nightAn Alaskan cruise allows you to get out and about on the terrain and experience the intense conditions, whilst a lavish, sophisticated and comfortable evening awaits you when you get back! During the daytime, you can engage in all manner of thrill-seeking activities which bring out your inner adventurist and naturist.

The shore excursions include:

On Alaskan cruise holidays, you will always have a wide range of land-activity packages to choose from. This is because not everyone who visits Alaska does so in order to channel their inner Ray Mears – though many certainly do! If you instead would prefer to focus more on relaxation and sunbathing, that is fine too. You can still see a great many wonderful aspects of Alaska from on-board the ship, such as gargantuan glaciers and hulking mountains. You can have as much or as little involvement in the land-activities as you want. Whatever you want out of your Alaskan experience, Cruise Nation are here to make that happen – you are in charge. After a long and rewarding day boldly exploring the terrain and wilderness (or basking in the comfort and delights of the on-board facilities!) you will no doubt have mustered up quite a fierce appetite, so it’s a very good job that your cruise ship will have magnificent on-board dining facilities and restaurants, wouldn’t you say?! Plentiful gourmet cuisine is just what you’ll need to refuel for the next day and prepare yourself for what it has in store. 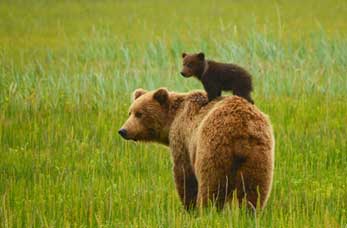 Given the sheer size of Alaska, it does not have a very dense human population at all. This is mainly because a lot of it is uninhabitable and the terrain and weather conditions are too much for some to handle all year round. You might be surprised to learn just how low the human population is, though: only around 735,000 people live in the entire state! But its animal population, on the other hand, is comparatively dense and has a great deal of variety. Quite staggeringly, there are actually more caribou in Alaska than there are human beings! 950,000 to be precise. 30,000 or so brown bears live in Alaska, which makes up around 98% of the US’s brown bear population.

There are also many other animals that call Alaska home, including black bears, polar bears, moose, bison, bald eagles, falcons, owls, many species of fish. During daytime land-activities, you may even get the chance to get up close to some of these glorious creatures – safely, of course, and in the hands of knowledgeable and highly experienced adventure specialists! It is of course your choice, but we would recommend getting out there and experiencing the wildlife, as that is another respect in which there is simply no place on Earth like Alaska.

There are many wonderful places your cruise ship will stop and allow you to explore and thoroughly enjoy. Listed below are just a few of them: 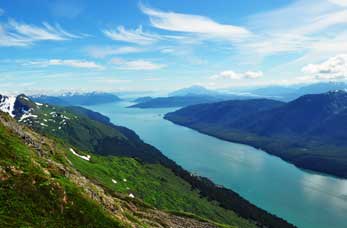 The fantastic state capital offers a good mix. The surrounding area offers particularly good outdoor activities, whilst the city itself provides alternative sightseeing options and the opportunity for a good old-fashioned shop! All the while, your cruise ship awaits your return in the evening, where the crew and staff will look after you like no-one else can. 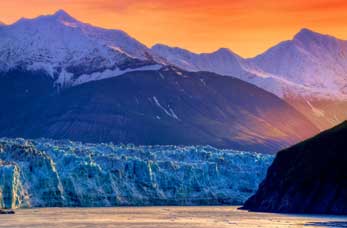 We cannot stress enough how essential it is that you take the time to appreciate the Hubbard Glacier – that probably won’t be hard though as it is 76 miles long! Your cruise ship will pass it and allow you to have a really good look at it. Seeing it on photos with one thing but when you clap eyes on it yourself it’s infinitely more astounding. Be sure to have your camera charged and ready so you can take a few souvenir snaps – photo opportunities do not get much better than this. 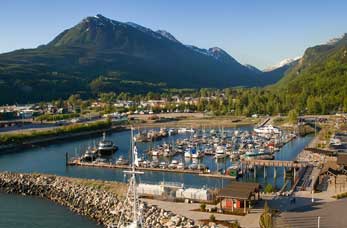 This charming and fascinating little city is an extremely popular cruise ship stop. Skagway’s strong mining heritage is still very much a part of its character and one of its biggest attractions is the narrow gauge railroad train, which is still fully operational but runs purely for the benefit of tourists during the summer months. There are some quaint old saloon buildings which make for great photo opportunities, as does the surrounding landscape (though perhaps that goes without saying).

Spanning more than 1,000 miles, the Inside Passage is the longest protected inland waterway in the world. It weaves through the islands of the Pacific Northwest, and is a very popular route for cruise ships. If you are into canoeing or kayaking, the Inside Passage offers an outstanding opportunity. 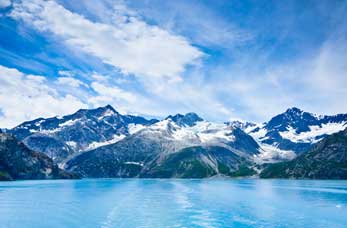 Just west of Juneau in the area known as the Alaskan Panhandle is Glacier Bay National Park and Preserve. There are no roads leading to it so it is a real naturist’s dream in that it is unspoiled! Most people who go to Glacier Bay, in fact, arrive on cruise ships, and the ones who don’t arrive by air travel. There are a great many outdoor activities headed by the park and preserve, including mountaineering, hiking, camping, fishing and kayaking.

Just to put it out there – holidays are ideal opportunities to get a bit of reading done, and on an Alaskan cruise it might be a nice idea to take some relevant reading material! There are a few books out there about or set in Alaska that would be interesting to read whilst you are there yourself, and though your days will most likely be filled with thrills and awesome sights, having a book to unwind with before bed could be a good call!

Into the Wild by Jon Krakauer

In April 1992, an adventurous 24-year-old hiker named Christopher Johnson McCandless decided to hitchhike almost 3,000 miles from Enderlin, North Dakota to Fairbanks, Alaska, where he would live off the land for a period of time. McCandless had two years earlier graduated from Emory University in Atlanta, Georgia with the seeming intention of then going on to acquire a second degree. Instead, he donated his $24,000 law degree fund to Oxfam and set out to travel all over the USA, living on a shoestring and taking up labouring jobs when he needed money, and going by the name of Alexander Supertramp. When he got to Alaska, however, things did not go as planned. The enthralling and moving story is told in great detail and with wonderful sensitivity by American writer Jon Krakauer in his 1996 book, Into the Wild. It is a truly insightful, captivating and rewarding read which, though tragic, demonstrates the allure of Alaska to those of transcendental and adventurous inclinations.

The Call of the Wild by Jack London

A classic American novel set during the Klondike Gold Rush, The Call of the Wild is one of those books that is relevant to people of all ages – and it is still being studied in school English lessons some 111 years later. It is about a Californian dog called Buck who lives on a ranch as the story begins but, through a sequence of events, is stolen and sold as an Alaskan sled dog. In order to survive, Buck has to accordingly reject his nurtured outlook and demeanour and revert to his primitive characteristics. It is a brilliant story which explores the whole nature versus nurture debate, as well as pondering the relationship between man and dog. It’s only a couple of hundred pages long or so too, so you could probably have it polished off in a few hours!

Why you should book an Alaskan cruise

In a sense, the expression once in a lifetime opportunity is appropriate here, but only in a certain respect. Enjoying a cruise holiday is indeed a wonderful thing to behold, but it doesn’;t have to be something you only do once – we defy anyone to visit Alaska and not be touched by the experience. Our affordable prices also make sure that it doesn’t just have to be a once-in-a-lifetime opportunity as well!

If you are thinking about booking an Alaskan cruise, or have any queries or wonders, please do not hesitate to get in touch – we are a simple dial of the phone away and a helpful member of Cruise Nation team will be more than happy to run you through the various cruise options, outlining their itineraries and prices. Experiencing the last frontier is a life-changing experience which will make you appreciate nature like never before.