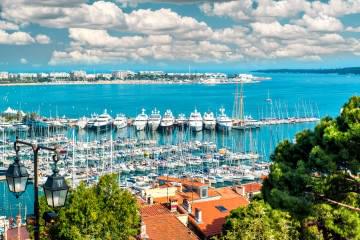 If You Can, Visit Cannes!

History, culture, art – there’s a wealth of experiences awaiting you in this much-celebrated destination.

Cannes has been one of the most prestigious holiday destinations in Europe for quite a number of years now. In fact, you could even go as far as to say that it is one of the most prestigious holiday destinations in the world. It is a gorgeous seaside city on the French Riviera which is synonymous with glamour throughout the world. Some cities you visit which are famed for excitement and pizzazz are somewhat disappointing when you get there, but Cannes is not one of them – everything you have heard is true.

Given that Cannes enjoys a Mediterranean climate, it is not uncommon for temperatures to reach 30 degrees celsius during one of its scorching summer days, and not only that – it gets 12 hours of glorious sunshine during the long summer season! If you are, on the other hand, visiting Cannes in the winter, you needn’t fret – the weather is still pleasant, remaining mild and more or less completely free of rain.

Located in southeast France, Cannes is more or less equidistant from Barcelona and Rome, and has an incredible history, the known part of which spans back to two centuries BC. Cannes is perhaps best known nowadays as the host of the annual Cannes Film Festival, which is arguably the most well-respected in the world, alongside the Venice and Berlin festivals.

The area became a popular tourist destination towards the end of the 19th century when Henry Brougham, British statesman and former Chancellor of Great Britain, bought land and arranged for the construction of a villa. His full title was Henry Brougham, 1st Baron Brougham and Vaux – so you can probably tell he was a pretty big deal. His development of Cannes meant that the English aristocracy were attracted to the area, and that is where it all started in that regard. The city became an extremely popular holiday destination for well-to-do Americans shortly after the First World War ended, when more and more luxurious hotels began to pop up. 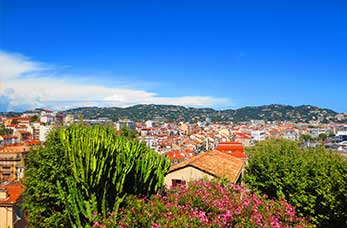 This 2km road stretches right across the shore of the Mediterranean Sea, and is one of the most popular and prominent roads in Cannes; it is instantly recognisable by the palm trees which line it. The Carlton Hotel, the Marriott and many other notable Cannes hotels are located on the Promenade de la Croisette, as well as many world-famous restaurants and prestigious shops and boutiques. This is not one of those things you should do ‘if you get the chance’ – no trip to Cannes is complete without visiting the promenade at least once; it is not really negotiable!

These four beautiful Mediterranean islands lie just off the coast of Cannes, and are easily reachable by boat. They are a popular tourist attraction due to their fascinating history – the Romans are believed to be the first to inhabit the islands during their reign. The two largest Lerins Islands are inhabited, whilst the smaller two are not.

This is the largest of the four Lerins Islands, and it is situated about half a mile off the Cannes shore. Though the biggest of the Lerins Islands, Ile Sainte-Marguerite is still not very big – it is just under two miles in length and just over half a mile in width. Despite its small size, though, it has an extremely interesting history, specifically in that it housed the mysterious Man in the Iron Mask for a good 11 years in the late 1600s! The historic fortress prison on Ile Sainte-Marguerite is perhaps its most famous feature, and this had been made even more so by the stay of the Man in the Iron Mask, whose identity has never actually been established, and probably never will be. There are many theories on the matter – that he was a relative of the King Louis XIV (made famous by Alexandre Dumas in his The Three Musketeers saga), that he was Oliver Cromwell’s son, that he was the son of a disgraced guard of Cardinal Richelieu’s – there are many. No-one ever saw his face, supposedly, so it will always remain a mystery. Visiting the island he stayed is a must for anyone with even a slight interest in history, though – it only takes 15 minutes from the Cannes shore.

The second largest of the Lerins Island, Ile Saint-Honorat has been the home of Cistercian monks since approximately 410 AD. The island is open to the public, and the 11th century monastery lies in ruins along the edge of it – it is a must see. The monks who live there also make wines in their spare time! 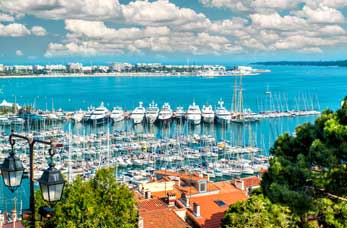 In the late 1930s, the French Minister of National Education, Jean Zay, decided to establish a cinematic festival in the city of Cannes. It would exhibit films from various nations, and was to rival the Venice Film Festival (which was actually organised by the Italian dictator Benito Mussolini). The idea was therefore very much supported by the Americans and the British, and the first Cannes Film Festival was set to take place in 1939. However, due to the outbreak of the Second World War it was unfortunately cancelled. It was not until 1946 – the year after the war ended – that the first Cannes Film Festival finally took place, at the back end of September. Due to a lack of sufficient funding, the festival was cancelled in both 1948 and 1950, but resumed again in 1951 and has taken place ever since. In 1952, they changed the month of the festival from September to May, and it has taken place in the fifth month of the year from then on. The change is said to be down to the fact that those running the festival no longer felt the need to compete with the Venice Film Festival, which also takes place in September.

Cannes Film Festival got into its stride in the early fifties. It garnered much more media attention, which is thought to be largely down to the increase in prestigious attendees – such as home-grown stars Brigitte Bardot and Alain Delon, as well as other film stars such as Ingrid Bergman, Kirk Douglas, Cary Grant, Grace Kelly, Sophia Loren, and Kim Novak. Legendary painter Pablo Picasso even attended the festival in 1956. This ‘star pulling power’ continued into the sixties, as the likes of Warren Beatty, Natalie Wood, Dustin Hoffman and Alfred Hitchcock were just a few of the notable attendees from that decade.

The current top prize – the Palme d’Or (translated literally as ‘the golden palm’) – was introduced in 1955, when it took the place of the hitherto top prize, which was called the Grand Prix du Festival. The latter once again became the top prize in 1964 due to copyright issues with the Palme d’Or name, and the Grand Prix du Festival remained the top prize for the next decade. In the 1975 festival, however, the Palme d’Or was reinstated. Ever since then it has been the top prize – one which is extremely synonymous with the Cannes Film Festival. It is one of the first phrases you think of when you hear ‘Cannes Film Festival’.

Some of the notable winners of the Palme d’Or at Cannes Film Festival include:

A brief history of Cannes

Do you know any interesting facts about Cannes, or any unmissable sights or attractions? If so, please feel free to let us know in the comments section below!