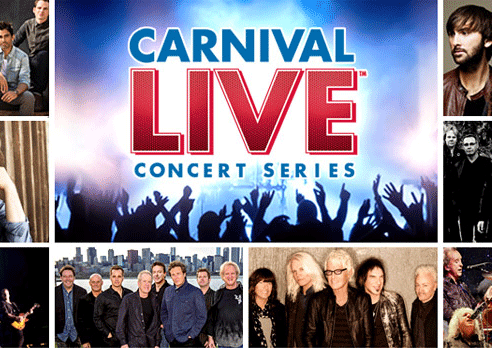 Is Carnival Live the Future of Festivals?

Featuring some of the biggest names in music and comedy, is Carnival Live the future for festival-goers?

When you think of all the cruise lines, it’s probably unsurprising to learn that Carnival has been first to hone in on the idea of concerts at sea that will entertain the masses (their tag line is ‘Switch on Fun’ after all). With a procession of famous faces and names making their way across the Carnival Live stages, it’s no wonder that this entertainment feature has been a big hit with not only regular cruisers, but first-timers too for who the appeal to see their favourite artist in an entirely new setting is of great appeal.

In 2015, Carnival Live welcomed names like Lionel Ritchie, who was the undoubted hero of Glastonbury 2015, as well as Olivia Newton-John, Leanne Rimes and Jennifer Hudson to name but a few. And the line up for this year is set to be even bigger!

During Autumn, guests on board Carnival cruises that stop in Nassau, Cozumel, Grand Cayman or Montego Bay will have the opportunity to watch show stopping performances from vocalists or laugh out loud with some of America’s greatest comedians.

The Carnival Live series allows Carnival cruisers to experience one-of-a-kind entertainment by major artists and performers, at amazing value (as little as $30 which is just over £20) – plus there’s not a bad seat in the house with performances being held in the ship’s main theatres which range from 900 to 1,300 seats.

Check out this video for a little preview of previous Carnival Live events:

With UK festivals becoming more and more popular here in the UK, tickets prices have soared, not to mention the fact they sell out in less than a day. With the cost of attending a UK festival rising, attending a concert in a different country (especially the Caribbean), is a hugely attractive option.

Whether it’s fans of an individual act that’s in the line up, fans of a specific music genre such as Jazz, Rock or Country, or just those seeking a unique experience; there’s plenty of scope for the Carnival Live series to appeal to cruisers from the UK. Plus the value offered from the other on board entertainment, inclusive dining options and great-value drinks packages, means that the Carnival Live concert experience can be combined with a tropical sun holiday.

The following acts will be part of the Autumn 2016 Carnival Live Series:

Best known for his role in Rush Hour alongside martial arts and stunt star Jackie Chan, Chris Tucker is an award-winning actor and comedian. Tucker became a favourite on HBO Def Comedy Jam and also starred in 1995 cult classic Friday as well as the Silver Linings Playbook more recently. Tickets to see Chris Tucker are $30 each or $100 for VIP.

As an award-winning comedian, it’s hard not to crack a smile listening to Jim Gaffigan’s anecdotes and jokes. As star of The Jim Gaffigan Show, which is a one-man story of his struggle of fatherhood, stand-up and appetite, Gaffigan has sold out shows in Madison Square Garden and performed for Pope Francis… plus 1 million others. As an actor, Gaffigan has also appeared in Portlandia, Flight of the Concords and Law and Order. Tickets to see Jim Gaffigan with Carnival Live are $30 each or $100 each for VIP.

As Miami natives, KC and the Sunshine Band have been entertaining the world since 1973, with their feel-good dance songs. They influenced a whole generation with their fashion, hairstyles and even the way people danced. The band has won numerous awards including People’s Choice, American Music Awards and even Grammy’s. With four mega number one hits, they’re a great choice for your first Carnival Live concert! Tickets are $40 each or $150 each for VIP.

Sam Hunt is one of the biggest country music stars in the US right now. After co-writing the hit ‘Come Over’ with Kenny Chesney and ‘Cop Car’ become a Keith Urban hit, Sam Hunt released his own album. Featuring popular songs like ‘Take Your Time’, ‘Break Up in a Small Town’ and ‘Raised on It’ Sam Hunt’s music has the familiar lyrics and notes of country music with an unpredictable modern edge. Tickets to see Sam Hunt are $75 each or $250 for VIP.

Thanks to his trademark voice, Trace Adkins has had several number one hits and sold over 10 million albums. He’s had 20 different singles that have listed on the Billboard Country Charts including ‘Ladies Love Country Boys‘ and ‘You’re Gonna Miss This‘. If you’re a fan of country music, then the chance to listen to a one-of-a-kind performance from the Grammy-nominated Trace Adkins is not to be missed! Tickets to see Trace Adkins are $40 each or $150 each for VIP.

If you’re interested in booking a Carnival Caribbean cruise which features Carnival Live, take a look at the schedule below and then use our Advanced Search website feature to locate the appropriate cruise package. 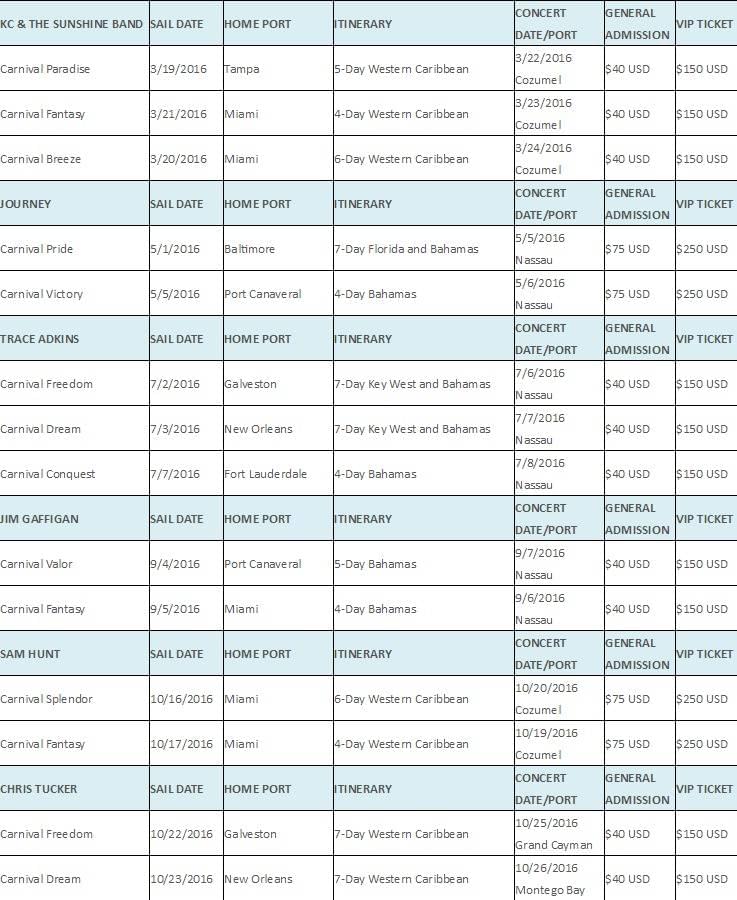