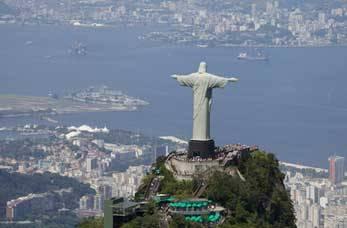 With all the excitement buzzing around Brazil at the moment, there’s never been a more appropriate time to look into booking a cruise which features a stay in Rio de Janeiro. There are few cities anywhere in the world which suit the cruise holiday format as much as Rio does – it has a lot of things to do and see, and speaking quite frankly, it’s just a gorgeous part of the world.

South America is one of our favourite regions here at Cruise Nation, and we’d even go as far as to say that Rio de Janeiro is one of our favourite cities in the entire world. It’s utterly fascinating and beautiful and also makes for a very popular cruise destination, as it lies right on the sea and is easily accessible by cruise ship (believe us – the approach is stunning). Every single year we provide a great many customers with unforgettable and luxurious cruises which include stays in Rio de Janeiro, but there’s never been a better time to make the decision to go than now. If you’ve considered it for a while, we think you should go right ahead and do it – there aren’t many places you could go in the world which will rival it in terms of scenic beauty and fascinating mixture of culture and history.

It’s a truly magical city which you’ll never forget – we can guarantee that. Given that it will play a pivotal role in Brazil’s hosting of the 2014 World Cup, the city is more thriving than ever right now, and will continue to do so long after the competition has come to its conclusion on July 13th. Many believe that the Brazilian football team can secure their sixth World Cup victory this time around – as they’ve got the advantage of playing at home, being perfectly accustomed to the climate and will have the support of the locals – but whether they do win it or not, the country will have a buzz about it for quite a while after.

A common misconception about Rio de Janeiro is that it’s the capital city of Brazil. This is not the case! Many people are quite surprised to hear that, but it’s true. It’s quite arguable that when a lot of people think of Brazil, they think of Rio de Janeiro. We think that this is because it’s such an influential city with a rich culture and an unrivalled sense of character.

Rio de Janeiro may not be the capital of Brazil, but it’s arguably the cultural capital, so we expect that this city will be even more exciting than the rest – both during this summer’s football prestigious competition and after. In fact, the chosen venue for the 2014 World Cup Final is the Estádio Jornalista Mário Filho which is located in Rio and seats just under 79,000 people!

There is no more luxurious way to travel than by cruise ship – anyone who’s ever been on a cruise holiday will be able to tell you that. It’s not something you can really imagine until you do it, but once you have you’ll never look back.

From the moment you step onto a cruise ship, the crew members will do absolutely everything in their power to make sure that your stay on the ship remains as pleasant as possible. Your every want and need will be satisfied by the staff on-board, who are totally committed to making sure you are comfortable and enjoying yourself.

Arriving at a destination on a cruise ship is by far the most exciting way. There are few better feelings than when you can see your destination off in the distance, getting increasingly nearer. It doesn’t matter what city you’re approaching or what part of the world you’re in – it’s exciting. But just imagine the view you’ll enjoy as you approach Rio de Janeiro on your vessel. You’ll see Christ the Redeemer atop Corcovado, Sugarloaf Mountain, the spellbinding blend of the urban and the rural, and the breathtaking tropical landscapes all around.

Things to do and see 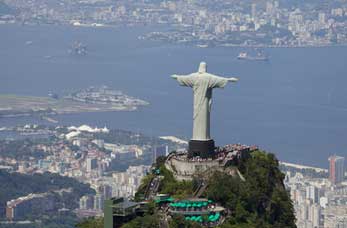 The famous image of Christ the Redeemer (above) is arguably the photograph which is responsible for the vast majority of the tourism that comes into Brazil. We’ve all seen this picture before, most likely, and it’s a magnificent image – one which will get anyone itching to travel.

Christ the Redeemer was completed in 1931, but the history of the statue spans back much further than that. It has been reported that as far back as the middle of the 1800s it was suggested that there should be a religious monument placed in the location the statue now lies. This location is of course Corcovado – a 2,300 ft mountain which is situated right in the middle of Rio de Janeiro.

The idea was quite a popular one amongst a lot of people, but when Princess Isabel wasn’t too keen on the idea and decided to deny funding, it was scrapped (this was 1889). However, when the second proposal was made some 31 years later, in 1920, this was made specifically by the Catholic Circle of the city. An event was put together in an attempt to raise funding, which they called Semana do Monumento (translating literally as Monument Week). To the delight of the Circle, a great many Brazilian Catholics did make donations, and a lot of signatures were also accrued throughout the week.

A few designs were thrown about, including a statue of Jesus with a globe in his hands, but of course the one we know now was chosen ahead of this and a few others – it depicts Jesus with his arms wide open. It was designed by a local engineer, Heitor da Silva Costa, whilst Paul Landowski (who was Polish-French and not Brazilian) was put in charge of the sculpting of it. When the latter and his team started working on the statue in 1922, they were based in Rio de Janeiro as you would imagine. In this team was Gheorghe Leonida, a Romanian sculptor who was renowned for his astounding talent; he had a heavy influence on the way Jesus’ face is portrayed on the statue, and became much more famous than he already was as a result.

Needless to say, when you go and see Christ the Redeemer, you must make sure you have your camera on you. It may be a rather predictable thing to do, but surely no trip to Rio de Janeiro is complete without a snap of this awesome statue?! Not only should you go up and see it to look at the sculpture itself, but the view of the city and the sea is another reason. Those of you who are particularly keen on photography – just think of the pictures you could take up there! 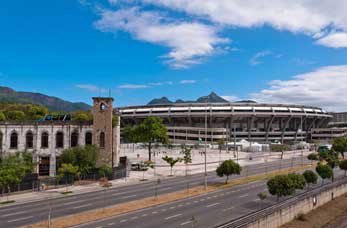 This enormous stadium is the one which has been chosen to host the deciding game of the 2014 World Cup – when the two deserving teams line up to face one another, there’s absolutely no doubt that this will be a cauldron of excitement and electricity.

The Estádio Jornalista Mário Filho, as it’s officially known, has a rich and interesting history in itself. It was actually built because of the World Cup: Brazil won the right to host the 1950 competition and the government decided to build a brand new stadium especially for it. A bunch of Brazilian architects were involved in the design, and construction began in August 1948, with just under two years until it needed to be complete. Construction quickly fell behind and wasn’t actually finished by the time it needed to be – nonetheless, it did host a number of games. The Brazilian national team got to the final of the competition and played there against Uruguay in the deciding game, which they lost. Attending that final match was just under 200,000 people, with the actual figure standing at a reported 199,854.

It’s been rebuilt for the upcoming World Cup and also the 2016 Olympics, as the original two-tier bowl was demolished. The new one has only one tier, and the seats are predominantly yellow but also blue and white, which, together with the green of the football pitch, represents the Brazilian national colours. If Brazil do go on to win the competition this year, the stadium could become even more symbolic and treasured than it already is. It’s definitely something any visitor to Rio de Janeiro should check out during their stay – it’ll make for a great photo opportunity, that’s for sure! 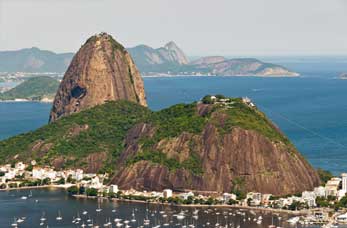 Most definitely another unmissable Rio de Janeiro landmark, Sugarloaf Mountain is something you should definitely dedicate some time to during your stay. It’s so named basically because it resembles a sugarloaf, which is the shape refined sugar was produced and sold in until sugar cubes were introduced just before the beginning of the 21st century. The mountain is 1,299 ft tall (that’s how far it rises above the bay).

Sugarloaf Mountain is situated right at the mouth of Guanabara Bay, and is actually one of several similar mountains which surround the Rio de Janeiro harbour area. This one is probably the most famous one because it is by far the most unusual and distinctive. You may be surprised to learn that the name ‘Sugarloaf’ is not a recent one by any means – though you would probably expect it to have been coined sometime in the first half of the 1800s, it was actually introduced in the 1500s!

Another one to certainly not forget the camera for, Sugarloaf Mountain will provide any visitor with photographs which will make them the envy of family and friends once they return home. Don’t worry, you don’t have to climb the mountain yourself – you can enjoy a swift and smooth cable car ride up to the top. 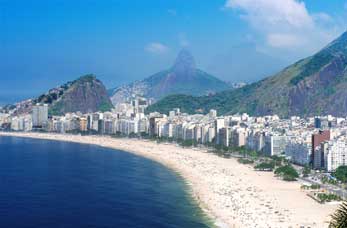 Like Christ the Redeemer, this is probably one of the first images that pops into anyones mind when they hear this marvellous city’s name. Copacabana is located in the south of the city, and is best known for the 4km beach. We probably don’t need to spell out the reasons you need to visit this area of Rio de Janeiro, because anyone who’s ever seen a picture of it will know exactly why you’d go: sheer relaxation on a heavenly beach.

Did you enjoy this blog post about Rio de Janeiro? Here at Cruise Nation we’re very excited for the 2014 World Cup, so we thought we’d write a little bit about one of our favourite destinations. We feel that cruise holidays in South America are particularly rewarding, as they’re a little bit unusual and offer a unique view of a truly magical part of the world.

Do you know of anything else that’s worth a look in Rio de Janeiro? If so, please share them in the comments section below! We’d love to hear from you. If you are interested in booking a luxurious cruise to Rio or elsewhere in South America, have a look at the wonderful deals right here!