Must Do Activities and Locations to Visit in the Caribbean

The Caribbean covers over 700 islands in one of the most exotic places in the world. There’s truly something for everyone, whether you’re an adrenaline junky or a beach bum. One of the greatest things about the Caribbean is how natural it all is – beautiful beaches and jaw dropping hiking trails await you.

This blog will list a variety of different things to see and do, ranging from exciting festivals to interesting and unusual activities.

When people think of Jamaica one of the first things that comes to mind is reggae music. If you love this type of music, a must-see place is the Bob Marley Museum. It’s situated in Kingston, interestingly enough in his old home. Although the museum is one of the main tourist attractions in this area, the actual building hasn’t been changed much.

The house itself is a spectacle, as it’s plastered in traditional Rasta colours, red, green and gold. It was also used as a recording studio, so if you’re a big fan of his music, you’ll be amazed to see where the legend used to work.

Apple Valley park has established itself as a popular tourist attraction that is owned by Patrick Lee. In this area is an 18th century home that rests by a man made lake. There’s also a forest reserve that has various swimming holes and waterfalls. This is truly a location where you can lie back and relax.

It’s possible to kayak or rent a paddleboat within the park. There’s also a number of hiking trails which offer beautiful sights. What’s amazing is how the park used to be a bauxite mine. The harm this caused was fixed by Lee who hired locals, helping to boost the surrounding economy.

To have access to the 169 hectare nature park you need to make an appointment. There’s a tractor pulled jitney (similar to a train except not on a set path) which operates from the train station in Maggotty, and it’s suggested to stay in the Apple Valley Guesthouse.

All of Jamaica’s latitude and longitude measurements are done at Fort Charles, a building that has been there since 1655. There was originally five separate forts, although Fort Charles was the only structure that survived the 1692 earthquake, it did sink by a metre.

At one point it was expected that the fort would be abandoned because it was surrounded by the sea on three different sides. Nobody expected that it would create a silt barrier, helping to keep the fort landlocked.

Back when Fort Charles was fully functional there were 104 guns used for protection. A number of the cannons are still present for you to view. In the centre of the fort is a museum that explains the history of Fort Charles.

Believed to be one of the most beautiful waterfalls you can find in the world, Dunn’s River Falls is one of Jamaica’s highest visited tourist attractions. In groups you link hands as you clamber up the natural limestone staircase that goes through the actual waterfall.

You’ll be surprised at how cooling the water is, and the entirety of the waterfall is shaded by tall trees. It’s mandatory to pay for a ticket, and a guide will assist you with the climb. It takes around 30 minutes to complete the route and swimwear is a must.

There’s plenty of activities besides the climb. You can find an orchid garden, a playground, stalls selling delicacies such as jerk chicken, a restaurant and even a craft market. It’s an ideal place to purchase gifts for friends back home. 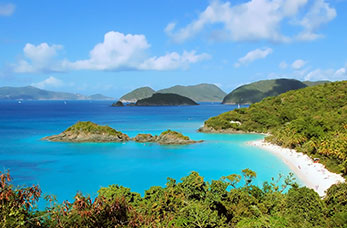 Back in the 1950s Laurence Rockefeller was touring this part of the world when he discovered St. John Island. At the time it was abandoned, so Rockefeller purchased various tracts of land and donated them to the US Government. Six years later, the land was named a national park, and the space has been extended to numerous surrounding islands and some underwater locations.

It’s an amazing place to admire the natural beauty the Caribbean has to offer. Whether it’s walking along the pristine beaches, exploring interesting reefs or going on one of the twenty hiking trails, there’s just so much to do.

If you’re an avid bird watcher this is definitely a location to visit. There’s over thirty different species of tropical birds, iguanas, giant turtles and other wildlife that freely roam this location.

An amazing natural landmark is Canon de San Cristobal. This canyon seems to appear out of nowhere. It’s situated 5 miles north of Aibonito and cuts over 500 feet through various central mountains. What makes it such a surprise is how the surrounding hills and fields hide it.

Canon de San Cristobal has the highest waterfall found on this specific island. Known as the Rio Usabon, it flows 500 feet down a sheer cliff face into the gorge. If you’re an outdoor enthusiast, take on the challenge of descending down the trails. It is fairly steep, so only those with mountaineering experience are suggested to do this. 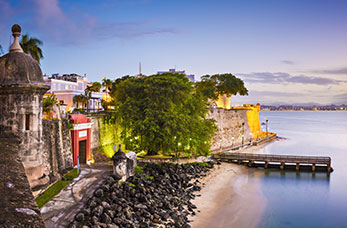 SoFo Culinary Festival is a semi annual feast that occurs twice in the year, once in mid summer and another in late autumn. Certain streets in Fortaleza are closed to any traffic and taken over by restaurateurs. Whilst you enjoy these tantalizing dishes belly dancers and live bands serve as entertainment.

Famous Caribbean establishments such as Parrot Club, Toro Salao, J Taste and many more set up kiosks where you can sample their cuisine. If you prefer to sit down the actual restaurants will still be open, and there’s also a selection of al fresco tables set up in various locations.

Fiesta de San Juan Bautista is the celebration of the patron saint of San Juan. It also represents the summer solstice, a prestigious and amazing event. The festival starts the week prior to June 24th, and there’s so much to see.

You can expect religious processions, minstrels, good stalls, firework displays, beauty queens and even drunken sailors. Although there’s a designated area for the parties, the rest of the city gets involved with their own house parties. Attendees are required to walk backwards into the ocean at midnight as tradition dictates.

During mid May there’s Semana de la Danza, otherwise known as a “Week of Dance”. There are numerous parades and dance events that anybody can take part in. A famous band from this area is The Ponce Municipal Band that perform in Plaza Las Delicias.

Ponce is well known for being the centre for composers and high society figures that that created their own distinctive art form during the 19th century. To truly be immersed in Caribbean culture this is the place to visit.

Locals that live in this area call the area El Radar, but for others Observatorio de Arecibo is known as the world’s largest telescope. The facilities resemble an alien ship that has been situated in the middle of karst. Those with a keen eye will recognise the telescope from 1995 film Goldeneye.

You can find a 20 acre satellite dish that rests within a sinkhole. Numerous 50 story cables help control the telescope so scientists can view faraway planets and stars. It’s at this facility that extensive research has been carried out on the planet Mercury.

Some of the worlds leading scientists travel to this telescope for various experiments, so there’s always a hub of activity. There is a visitor center that has information on how the telescope works, and the sights from the viewing platform are jaw dropping.

Although you’re firmly positioned in the Caribbean, Fiesta Artesanos de Bacardi has the feel of an American country fair. What makes this festival stand out compared to others is how it brings the largest number of artisans in one location.

Each year 125 crafters sell and display their items. The culture is astounding here, featuring folk art, santos and various other bargains. It’s a delight to appreciate the bomba y plena singers that play traditional music.

Nelson’s Dockyard is a historic location which serves as Antigua’s most famous tourist sight. It has been around since 1745, but was abandoned in 1889 due to a decline in strategic importance and economic issues associated with the British Crown.

Restoration of the dockyard started in the 1950s, and the royal naval base has now become active again. As a matter of fact, it’s the only marina this side of the western hemisphere. There’s numerous restaurants, shops and inns that you can enjoy whilst you appreciate the sights this area has on offer.

One of the must see areas is the Dockyard Museum. It was originally a former officers residence, although now it has two floors filled with island history, how the dockyard was constructed and what daily life is like.

The must see locations and activities in the Caribbean

By looking at everything that’s on offer it’s impossible to be bored in the Caribbean. It’s definitely a worthwhile place to visit, and if you go by cruise ship you get the luxury of staying on a floating hotel whilst seeing these amazing sights.

If you have any questions about the cruises to these locations get in contact today, or connect with us on Twitter: @Cruisenation.