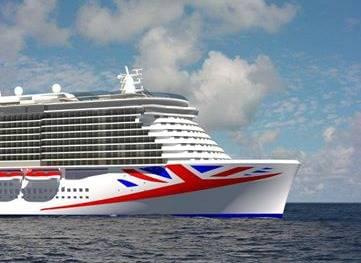 Will P&O’s new mega-ship mark the beginning of a change for the cruise line?

Yesterday P&O Cruise Line announced that they were planning to build a 180,000 tonne LNG-powered cruise ship, scheduled for delivery in 2020. Carnival Corporation, the world’s largest leisure travel company, recently signed a memorandum of agreement with leading German and Finnish shipbuilders Meyer Werft and Meyer Turku to deliver a next-generation cruise ship for P&O Cruises, the largest cruise ship to be built specifically for the British market.

The new ship will exceed 180,000 gross tonnes and will accommodate approximately 5,200 guests (lower berths). Through an innovative use of space, the ship will offer an extensive range of dining, entertainment and relaxing features.

The ship will be built by Meyer Werft at its shipyard in Papenburg, Germany, with an expected delivery date in 2020 and will feature the company’s exclusive “green cruising” design as one of the first generation of cruise ships to be fully powered by Liquefied Natural Gas, shipping’s most advanced fuel technology, which will significantly reduce air emissions.

P&O Cruises senior vice president Paul Ludlow said: “These are very exciting times. The number of British passengers taking a cruise in the past five years has significantly increased, boosted most recently by our very successful launch of Britannia last year. We know there is still huge potential as more and more people realise the value for money, choice and range of dining and entertainment options available on ships of all sizes. With an amazing range of itineraries, from two days to three months, there is a cruise to suit every budget.
“P&O Cruises is uniquely experienced in designing ships to meet the specific needs and aspirations of British passengers and the agreement by Carnival Corporation & plc to build a new ship of this size reflects all that our guests and prospective cruisers have been telling us and shows our confidence in the growth of the UK market.
“This ship will be the largest in the P&O Cruises fleet, will have a striking new exterior and interior design and will comprehensively embrace the company’s classic and iconic features. Innovative new guest experiences will be announced soon.”

The new vessel will be the most environmentally efficient ship in P&O Cruises history. The ship’s “green cruising” design will use LNG to generate 100 percent of her power both in port and on the open sea, significantly reducing exhaust emissions to help protect the environment in support of the company’s sustainability goals.

Despite many cruise lines now aiming to build bigger and bigger ships, this recent announcement by P&O has been received with mixed reactions. P&O has a firm foothold in the cruise market and is preferred by many for it’s small and mid-sized ships.  On the Facebook post below by P&O, you’ll notice a clear divide for some wanting the company to launch more smaller ships whilst others argue that P&O needs to keep up with competitors and  they see large ships packed with extra frills as a way to do this.

Some cruisers commented on the post that P&O should instead be investing in refurbishing and updating some of their current ships. However some people may not realise that P&O have rolled out a four-year plan to rennovate Arcadia, Ventura, Oriana and Oceana. In fact P&O recently released mood boards for the refit designs for the Oriana which you can see below.

P&O is not the only Carnival brand which will be updating its fleet. As part of the agreement with Meyer Turku, Carnival Cruise Line is also expecting two new LNG-powered ships which are scheduled for delivery in 2020 and 2022. In addition Costa Cruises new ship which was scheduled for delivery in 2020 has been pushed back to 2021 to allow Carnival Corporation more time to ensure that capacities are filled across each of its brands.

In total, Carnival Corporation has agreements in place to build seven LNG-powered cruise ships across four of its 10 global cruise brands with the first of them being delivered in 2019 for AIDA Cruises and Costa Cruises.

“We are proud to be at the forefront of introducing LNG-powered ships to the cruise industry, working with our partners to achieve shipbuilding breakthroughs like this that will help us produce the most efficient and sustainable ships we have ever built,” said Arnold Donald, CEO of Carnival Corporation & plc. “This is also an important step in our fleet enhancement plan that enables us to execute on our long-term strategy of measured capacity growth over time, while delivering innovative new ships that further elevate our already great guest experience. Every time we launch a new ship, we have a new opportunity to create excitement and show consumers why cruising is a great vacation at an exceptional value, especially for those who typically consider land-based vacations.”

As part of its fleet enhancement plan, Carnival Corporation has already taken delivery of three new ships in 2016 for its AIDA Cruises, Carnival Cruise Line (Carnival Vista) and Holland America Line (Koningsdam) brands, and plans to launch the all-new Seabourn Encore in December 2016.