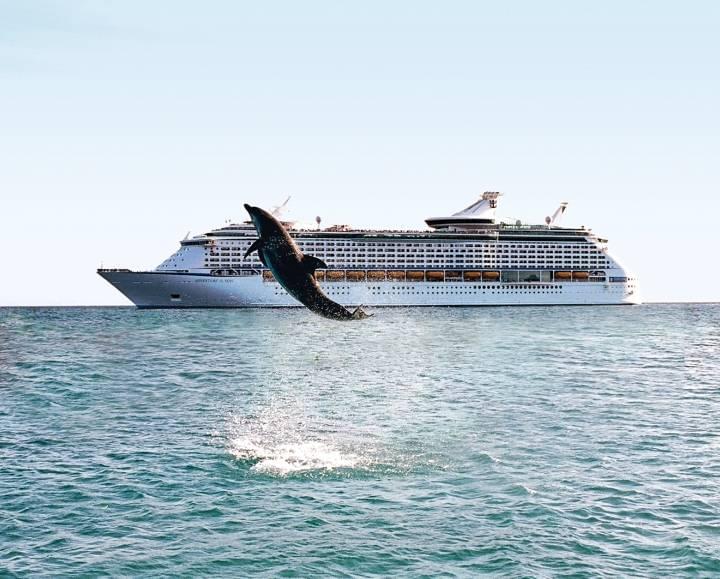 10 Animals You Can Spot from a Cruise Ship

Grab your binoculars, because we’re about to spot some wildlife!

Travelling the world by sea has some pretty great perks, and one of them is the wildlife spotting opportunities. With over 230,000 known species of plant and animal life in the worlds oceans, chances are good that you’re going to spot something along your cruise journey. In case you’re wondering what kind of wildlife you’ll have the opportunity to see, take a look at these 10 animals you can spot from a cruise ship and learn more about the destinations where you’re most likely to see them…

1. Dolphins
Cruising the oceans, you’ll have many great chances to spot these beautiful creatures. There’s 40 different species of dolphin and they can be found all around the world, from Cardigan Bay to the Caribbean. One of our preferred places for opportunities to spot dolphins is the Caribbean which is home to bottle-nose, spinner and spotted species. However, if you’re heading on a New Zealand cruise, keep an eye out for the smallest and rarest dolphin species – the Maui Dolphin which is the only place in the world that they can be found. If you are planning a cruise to the Caribbean, it could be worth researching some excursions for dolphin sighting tours for an opportunity to learn more about the dolphins. Often dolphin and whale excursions are run in conjunction with one another so you’ll get a chance to see humpback and sperm whales too depending on the time of year that you visit.  Bottle-nose dolphins in particular have been known to travel in pods of over 1,000 which to see would be an incredible opportunity to say the least!

2. Sunfish
On first sighting, you’d be forgiven for thinking this fish is some kind of floating blob. Typically Sunfish are as tall as they are wide, and after a long dive in the ocean depths it’s thought that they emerge at the surface, swimming on their side to present their largest surface area to the sun for a kind of thermal recharge. Sunfish can grow up to 3.2 m (10.5 ft) in height and when seeing them swim at the surface on their side, it’s can difficult to determine immediately what they actually are. Ocean Sunfish are native to the temperate and tropical waters of every ocean in the world, however they’ve even been spotted off the coast of the UK!

3. Crocodiles
The Panama Canal is one of the most intriguing cruise destinations in the world. Connecting the Atlantic Ocean to the Pacific Ocean, the canal stretches over 77km and it’s home to both the American Crocodile and the Spectacled Caiman. With stretches of the canal lined by thick jungle, it’s a haven for crocodiles and caimans to bask in the sunshine just out of the water along the shores.

4. Whales
Spotting whales at sea is an incredible sight and one which will stay with you for many years to come. There’s a variety of different destinations where whales can be frequently spotted and these include Alaska, Hawaii, Canada and the Caribbean. Alaska has a particularly thriving whale population, here you can find Orca, Humpback Whales, Minke Whales, Beluga Whale and the grand Blue Whale . The best time to visit Alaska for whale sightings is in the Summer months when the whales travel here to feed on the abundant sea life.

5. Sea Otters
You’ve probably seen Sea Otters here and there around the internet, their undeniably cute faces and seemingly laid back attitude (shown by them floating along the water on their backs) have won over the hearts of people everywhere. One of the best places to spot Sea Otters is in Alaska with a reported 73,000 animals living there in 2006. Other locations to spot Sea Otters include Canada and New England. If you have high hopes of spotting a sea otter, then we’d recommend bringing your binoculars. Sea Otters are shy creatures and are likely to head for cover upon seeing a giant ship approaching.

Animal Fact: Sea otters often dive to the sea floor in search of food, they can hold their breath for up to 5 minutes and their the only marine mammal capable of lifting and moving rocks on the sea bed with their paws.

7. Bald Eagles  Whilst cruising Alaska, keep an eye out for Sitka Spruce trees which make up 78% of the nesting sites for Bald Eagles. These majestic birds typically take up residence near large bodies of water where fish are abundant, so being on the water your chances of spotting one are pretty good! Some cruise ships (such as Cunard) keep binoculars in some of the lounges so you can use these to spot wildlife on land. Alaska is home to around 30,000 Bald Eagles and if you want the greatest chance of spotting them, then lookout for an itinerary featuring Haines cruise port. This is the home to Chilkat Bald Eagle Preserve where during the fall season, as many as 4,000 Bald Eagles gather to feast on spawning salmon in the Chilkat River.

8. Sea Lions and Seals
These charismatic creatures can be found in a variety of cruise ports including the Galapagos, Victoria in Canada, San Francisco and along Polar and Baltic cruise itineraries. Depending on the species, they can be found dozing on beaches, pontoons in harbours or swimming playfully alongside small boats. One of the best places to experience seals is in Victoria where you can scuba dive in the harbour and swim with these friendly marine mammals.

9. Manta Rays Kona in Hawaii presents an incredibly special opportunity for you to experience – diving with Manta Rays! These astounding creatures range from 5.5m to 7m in width and feed on zooplankton – so you can put your mind at ease as you’ll be perfectly safe! In Hawaii you’ll go on a night time dive, equipped with diving gear and a swim platform before being submerged in the water where you can meet the rays face-to-face as they glide through the light beams from the swim platform and the boat. A truly magical experience!

10. Flying Fish
There are 40 different species of flying fish and they can be found in oceans all around the world although they do prefer subtropical and tropical waters so you’re most likely to spot them in the Pacific, Indian and Atlantic oceans. Before breaking through the surface of the water, Flying Fish build up speeds of 37mph and when they leap out of the sea they can reach heights of around 1.2 metres!

Have you ever spotted any of these animals on a cruise holiday? Or have you spotted different wildlife? We’d love to hear your travel tales so let us know about them in the comments below or on our Facebook and Twitter pages!