Exceptional value… your customers get much more for less with NCL

NCL’s Free at Sea upgrade packages add more than a touch of luxury and indulgence to any cruise and great added value. Book now and your customers receive all applicable packages from as little as £149 pp on a 6- to 8-day cruise. This gives them: 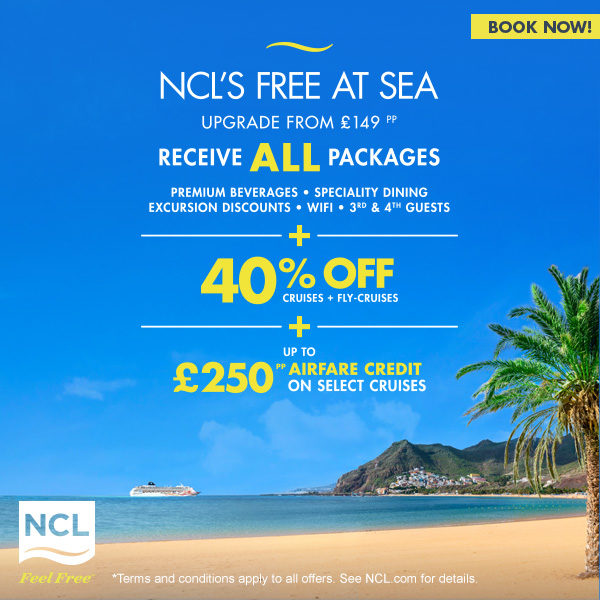 Be the First to discover a new experience at sea

To the trailblazers and the tastemakers. To the first-time seekers and explorers of the extraordinary. This one was made for you. Welcome aboard Norwegian Prima, the first in a new class of ships designed to elevate every expectation. Explore the greater wide open with the most outdoor deck space of any new cruise ship. Unwind in our most spacious accommodation and enjoy first-in-class service so you won’t wait a second for that second round 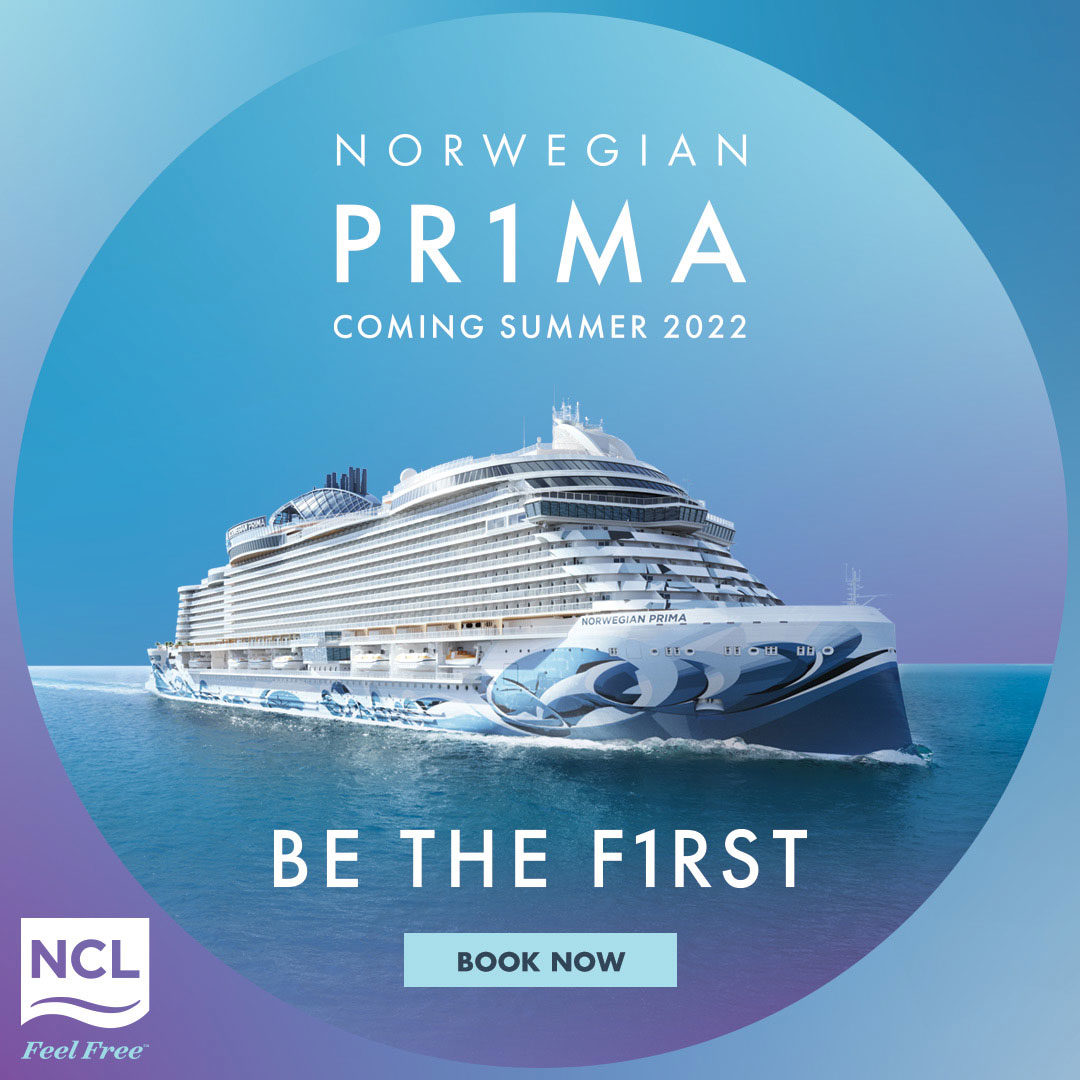 INTRODUCING FREE AT SEA - YOUR HOLIDAY, YOUR WAY.

Norwegian Cruise Line have reimagined the concept of freedom, flexibility and choice with Free at Sea – their superb premium cruise product.

It enables you to design your own bespoke holiday by adding valuable extra benefits and luxuries that will make your cruise unique from £99 per person on top of the great value base fare.

Free at sea Choices include:

Discover what it really means to feel Free at Sea…

Enjoy a wide selection of soft drinks, spirits, cocktails, wines by the glass and bottled or draft beer served in all bars, lounges and restaurants throughout your cruise.

With so many speciality restaurants to choose from, there’s no better way to enjoy a wide selection of unique dining experiences! You can dine in Teppanyaki, Le Bistro, Cagney’s Steakhouse and more - the choice is yours and the options are endless! If not selected as part of the Free at Sea promotion, speciality dining can also be booked in advance or on board on the first or second night of the cruise (for a cruise of three nights only on the first night).

Guests three and four in the stateroom pay only the applicable tax for their cruise. A great option for those of you travelling with children. You can invite your friends and family along for the cruise of a lifetime! Applicable on select sailings only.

Make the most of time ashore with US$50 shore excursion discount per stateroom, per port of call.

You’ll enjoy up to 250 minutes of Wi-Fi per stateroom that you can use anywhere on the ship. Stay connected at sea and share holiday moments with friends and family back home.

Every Norwegian Cruise Line ship offers a huge choice of accommodation from comfortable, affordable Inside Staterooms to family friendly Staterooms and the luxury of our Suites and Villas. So whether you are travelling solo, planning a romantic cruise for two or holidaying with the whole family, you will always find what is just right for you.

Accommodation Designed for you

When it comes to the time to call it a day, you’ll discover a fantastic choice of accommodation. All of the NCL Cruise ships offer an array of luxurious Suites, many in an exclusive enclave at the top of the ship with its own Courtyard, pool and sun deck – The Haven by Norwegian™. Suite guests also enjoy special extras like 24-hour butler service, concierge service and invitations to exclusive breakfasts and lunches.

Other Norwegian Cruise Line accommodation options include Mini Suites and Balcony Staterooms, Oceanview and Inside Staterooms and a big range of flexible, adaptable accommodation designed with families in mind. If you’re travelling solo, selected ships feature unique Studios with no single supplement. They’re located in a private keycard access complex and come complete with their own Studio Lounge, where you can meet fellow Studio guests over coffee or cocktails. And wherever you lay your head, little luxuries like twice-daily stateroom service and 24-hour room service come as standard.

Imagine dining in a different restaurant and choosing from a tempting new menu every night of your cruise. All of the NCL cruises offer a great choice of dining venues included in your fare, including two Main Dining Rooms, huge buffets, on-deck grills and cafés. A cover charge opens up a world of different cuisines in the speciality restaurants. Think authentic French cuisine, Italian, pan-Asian, American steakhouses, Brazilian and Japanese Teppanyaki, all served in unique venues with a great ambience.

Key to the experience is Norwegian Norwegian Cruise Line’s Freestyle Dining with up to 28 tempting dining choices on a single ship. Lots are included in your cruise fare, like up to three Main Dining Rooms, each with a classis or contemporary ambience and a different menu every night. Then there’s the lavish buffet with cooked-to-order dishes and a huge salad bar, 24-hour informal eateries, deck grills and room service around the clock. A cover charge opens up a world of dining choices in their signature speciality restaurants, where authentic cuisine ranges from Japanese Teppanyaki to gourmet French, rustic Italian to a Brazilian Churrascaria and a great all-American steakhouse. And whichever you choose, no fixed dining times and no pre-assigned seating let you set the tone for your evening, taking your seat when and where you choose between 5.30pm and 10.30pm with restaurants open until midnight. You can dress the way you choose, too – resort casual is fine day and night. Norwegian Cruise Line's latest ships take Freestyle Dining into a new era with a fine dining seafood experience inspired by their first celebrity chef, Geoffrey Zakarian. You can also dine alfresco on The Waterfront, the revolutionary oceanfront promenade or at the heart of the action at 678 Ocean Place, the free-flowing atrium.

Norwegian Cruise Line will take you to some of the world’s most fabulous destinations, where you’ll have the freedom to explore at your own pace. The multi-award-winning European programme includes year-round Mediterranean cruises from Barcelona, Civitavecchia (Rome) and Venice, taking in grand cities, chic resorts and gorgeous Greek Islands. You could escape for a week, or enjoy the ultimate Grand Mediterranean voyage, taking in such contrasting ports as Venice, Istanbul and Barcelona or seek out the winter sunshine in the Canary Islands and Morocco.

Their Northern Europe cruises take in the best of the Baltic Sea, the Norwegian Fjords, a circumnavigation of the British Isles and an exciting voyage to the North Cape during the summer solstice.

You can also chose to cruise like a Norwegian in the Caribbean, sailing from six exciting ports including Miami, New York City and New Orleans to the Eastern, Western and Southern Caribbean. You could even experience their latest ship, the incredible Norwegian Getaway sailing year-round from Miami to the Eastern Caribbean and the Bahamas. Her sister ship, Norwegian Breakaway, makes her home in New York, sailing to the Bahamas and Florida and to Bermuda.

Many cruises call at Norwegian Cruise Line's own private island, Great Stirrup Cay, where you can cast yourself away for the day, enjoying land and water sports. They're also creating a brand new private island experience, called Harvest Caye and set on the unspoilt southern coast of Belize.

Other destinations include Alaska, where you combine a spectacular 7-night cruise with a land package taking in the Canadian Rockies or Alaska’s Denali National Park; and autumn sailings along the coastline of New England and Canada. And nobody does Hawai`i quite like Norwegian Cruise Line. That’s because the U.S.-flagged ship, Pride of America, is the only cruise ship to call at all four main islands in just one week.

A hot ticket for winter is a South America cruise between Valparaiso and Buenos Aires with highlights including a voyage around Cape Horn, the Falkland Islands and the Chilean fjords.

When morning comes, you’ll always find the perfect place to spend your day. You can get wet and go wild at multi-slide Aqua Parks on their latest ships or hit the heights on our climbing walls. Chill by the pool or break a sweat on the multi-use sports courts or in the state-of-the-art gym. Or indulge in some me-time in the luxurious Mandara Spa® with its thermal suites, exclusive body therapies and beauty treatments using the finest natural oils and exotic ingredients.

And when it’s time to go ashore, Norwegian’s great shore excursions are your passport to discovery, adventures and experiences that you’ll remember forever.

Norwegian ships are big on entertainment with electrifying nightlife in exciting venues all over the ship. Take in a high-energy music and dance production show in a superb theatre, catch some cool jazz, take to the dance floor or just hop the night the away around up to 22 bars and lounges, each with its own unique vibe and ambience.

The newest ships put on even more of a show with big name headline acts, like Blue Man Group, Legends in Concert® and Broadway blockbusters including Rock of Ages and Legally Blonde The Musical™. You can chill out in a genuine Ice Bar kept at eight degrees below zero, hit the casino and enjoy a cirque-style dinner show with amazing acrobatics and special effects.

This smash-hit broadway show has already won a variety of different awards. It features a number of big-bangs songs from Duke Ellington, an onstage jazz band and some of the best dancing at sea!

This incredible show is exclusive to Norwegian Breakaway and is already proving to be one of Norwegian's most popular shows ever! Relive the rock anthems of the eighties as you follow the story of a small town boy and girl from Los Angeles falling in love and following their dreams.

This sizzling Latin dance show will leave you breathless! Be prepared for an astounding performance from some of the world's most gifted dancers.

This one-of-a-kind theatrical dining experience takes place in the colourful big top! Feast your eyes on the outstanding acrobats, musicians and aerialists while you enjoy a wonderful dinner.

When you book a Premium All Inclusive cruise with Norwegian, you get a lot of bang fory your buck! Your drinks throughout the ship will be included. This includes spirits, draft or bottled beer, wines by the glass, cocktails, speciality coffees, soft drinks and juices. You also get a bottle of water per day delivered to your cabin.

As well as this, your daily gratuities are also included.

Norwegian Edge is a massive investment of over $400 million which will see several members of the Norwegian fleet undergo a series of dry-docks to renovate and upgrade their facilities and decór.

The ships due to undergo refurbishment as part of Norwegian Encore are:

We're just checking with our authors to see what the latest is...

Let our cruise experts keep you up to date about the latest cruise industry news, the most luxurious new ships, and the hottest deals.